I have spent a few days trying to get it to work. Currently I am using a 64 GB eMMC for the boot device. I have tried different flash images. (The pre-flashed image for the eMMC, Ubuntu 15.04 20150710, and Android 4.4.4 (v3.2))
So far they all boot successfully but takes about 10 min. no matter if it is android or Ubuntu. Once booted the mouse and keyboard are not usable (I've tried 3 different sets and with both USB 2.0 and 3.0 ports). The Ethernet port isn't working either so I cannot SSH into it to troubleshoot software wise.

I'm starting to run out of ideas for troubleshooting other than requesting an RMA for the device. I'll see if I can get some log files by booting the device and transferring the files from the eMMC with another computer using the eMMC usb adapter and post them here.

Thanks in advance for any help or suggestions.
Top

this is here/say that if you do in fact get a good boot up and the system seems ok
firstly go into the odroid utility and resize your "root" partition..
anything else in the utility can come after you reboot having resized the "root" partition

please make shure you have expanded the ubuntu image to it`s full size
and should be around 4.7 to 5 gb once expanded

on some earlier systems like 32bit windows and alike they will only expand the image to a 4gb image file
& then it can be flashed .and it will even pass a verify because it knows no difference from the size it had to read from and was flashed from..
but this image is not complete and wont work properly

a full size image once flashed is required to make the system work correctly..

flashing the card to start with does take time 10-15 min`s depends..

try if you can with a 8gb sd-card. this may shed a different light on the subject...

ubuntu does not take 10 mins to load.up and run 2-3 min`s tops .android is a different matter

you could try with some p1000 fine grade emory paper to clean the flux of the usb terminals/pads..if there is indeed flux on them
this has not been an issue for quite some time as it was revealed and the problem was resolved..but who knows you may have an early batch board..
this could also be said that there may well be flux on the eth terminals..but i have never seen this..

on the Ethernet issue..this is a matter on it`s own governed by your own capability`s to set the network correctly hardware wise..a fail on the xu4 side is not out of the question..
Last edited by phaseshifter on Mon Dec 07, 2015 5:39 am, edited 8 times in total.
Build It And They Will Come...Be Bold And Mighty Forces Will Come To Your Aid..!!!
Top

How did you connect the eMMC to your XU4?
Can you take a picture and show it to us?

Android may take several minutes for the first booting.
But it should boot within 1 minute after that.
Top

not being smart here but thorough you do have the selector switch set to "emmc" ..??
what color dot is on your emmc card please...
Build It And They Will Come...Be Bold And Mighty Forces Will Come To Your Aid..!!!
Top

This is how the eMMC is mounted. It has a blue dot on it since it was pre-flashed with linux. It is following the screen printed outline. Having it plugged in any other way would probably cause it to not boot. 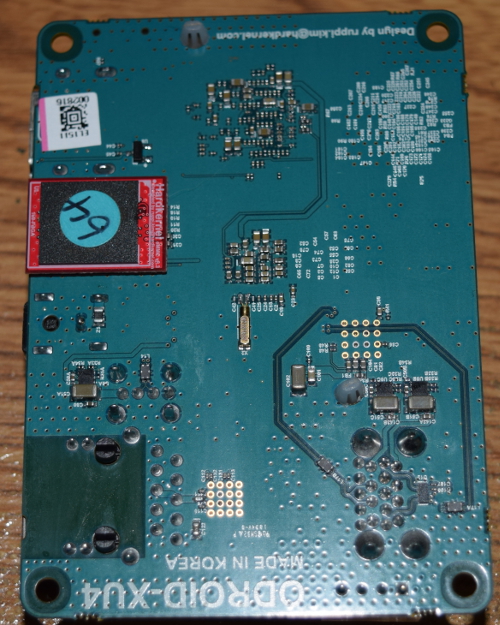 Here is the boot select switch and the position it is switched to. This would also cause it not to boot if it was in the incorrect position. 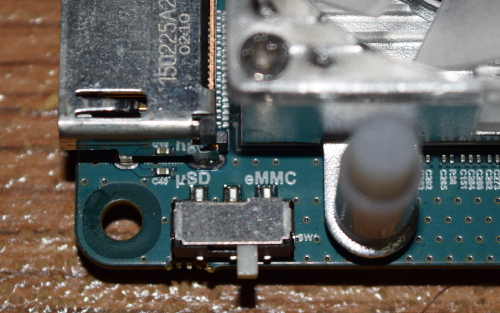 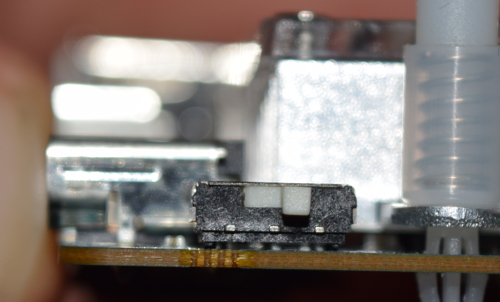 The image was fully expanded from its compressed form.

The device itself is booting just fine. The issue is with the ethernet port and USB not working.
Top

Some portion of the root file system seems to be corrupted.
Please reinstall the latest OS image.
http://odroid.com/dokuwiki/doku.php?id= ... e_20150710

I will try re-flashing the eMMC but I would like to know why you think that the filesystem corruption would be present in 3 separate flashed images with different operating systems and causing exactly the same issues.
Top

try if you can with a 8gb sd-card. and Ubuntu image ...this may shed a different light on the subject...
Build It And They Will Come...Be Bold And Mighty Forces Will Come To Your Aid..!!!
Top

Sorry for the long wait for this post. I did try using an micro sd card and it will not boot at all. It only has a solid red light. I will try an android image and an older linux image to see if there is any difference.
Top