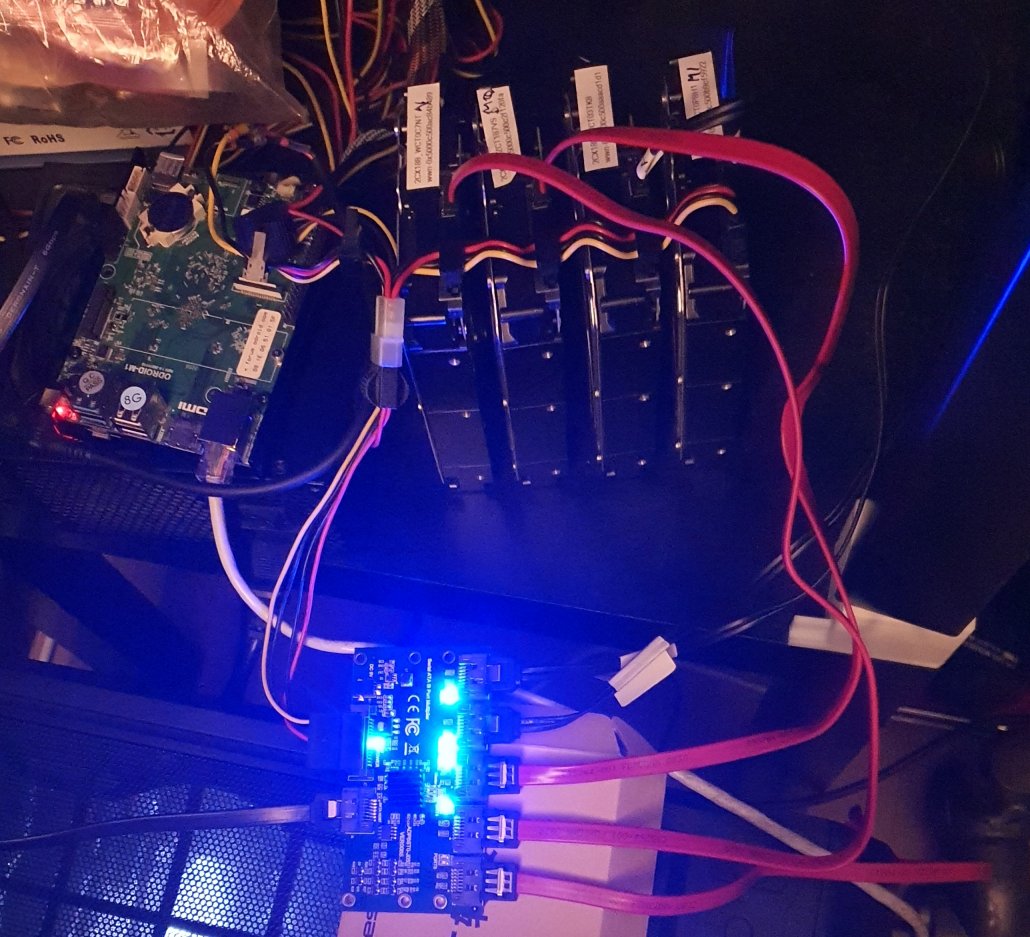 I tested raid1 also, but forgot to add --assume-clean option and it ran background resync while test. I found out after two days.

any requests ? these are WD 8TB SMR disks. It does good sequential read/write, but not good at random or heavy file system IOs.

dmesg output please. It's about whether RK3568 and the PM negotiate CBS or FIS-based-switching.

And if there's something wrt SATA below /sys/kernel/debug/ output would be also great!
Top

And if there's something wrt SATA below /sys/kernel/debug/ output would be also great!

Unfortunately yes. AFAIK (based on DT contents) I would believe it's this controller inside the recent RK SoCs: https://www.synopsys.com/dw/ipdir.php?ds=dwc_sata_ahci

So FIS-based switching should work (also mentioned in the TRMs) but maybe it's a driver or DT thing.

I've looked into Rockchip's most recent BSP code drop and the relevant message is here: https://github.com/radxa/kernel/blob/st ... ci.c#L2359 (should be the same with 4.19?)
Top

FBS is not supported on 5.18 mainline release either.

Doing raid on a port multiplier is not likely to be a satisfying experience. Awesome tech to connect additional drives - but trying to multiplex near-simultaneous transfers on them may work but the transfer rates will disappoint.
Top

PigLover wrote: ↑
Thu Jul 21, 2022 1:05 pm
but trying to multiplex near-simultaneous transfers on them may work but the transfer rates will disappoint.

That's why getting FIS-based switching to work is part of the game since with CBS crappy performance 'by design' is all that could be expected.
Top

4 disk raid-z is slightly better.
it's little bit fast because raidz does not read back from disk while writing. mdadm raid5 does read some data from disk when writing new data. (why? overlapped chunks?)

I've asked Rockchip about the CBS vs. FBS issue (though in the context of RK3588) and they responded with

Haven't checked yet how this could be applied/adapted for RK3568 (BSP and mainline kernel).
Top

Haven't checked yet how this could be applied/adapted for RK3568 (BSP and mainline kernel).

I should search for rockchip,rk-ahci

I removed AHCI_HFLAG_YES_FBS check from kernel source and force FBS mode.
and it's working. need test but it booted, all disk recognized, read/write works.

I should test CBS again. mdadm raid does not like oflag=direct/iflag=direct for some tests.
and make zfs-dkms work with modified kernel.
Last edited by zupet on Wed Jul 27, 2022 1:25 pm, edited 4 times in total.

Thank you! So we know the SATA implementation supports FIS-based switching and it's just a driver/DT problem preventing FBS getting negotiated

Since mdraid is designed that way? IMO nobody should use mdraid's raid1 (better do btrfs raid1 or a zMirror) but if you want to stick with mdraid always use raid10 instead: https://archive.ph/5F7Lb (this works even with just 2 disks since almost a decade).

Do you have by accident a bunch of SSDs lying around since with those HDDs that perform really worse with random I/O it will be hard to measure FBS benefits anyway?

Then a test with fio, no mdraid and mixed write/read loads on all disks would give a better picture.

But with HDDs a 'use case' where the difference could be seen is a RAIDz resilver with tons of live data and a ZFS version not already implementing sequential resilver. Though with spinning rust the differences might not be that noticeable anyway...
Last edited by tkaiser on Wed Jul 27, 2022 8:48 pm, edited 1 time in total.
Top

tkaiser wrote: ↑
Wed Jul 27, 2022 3:02 pm
Thank you! So we know the SATA implementation supports FIS-based switching and it's just a driver/DT problem preventing FBS getting negotiated


tkaiser wrote: ↑
Wed Jul 27, 2022 3:02 pm
Do you have by accident a bunch of SSDs lying around since with those HDDs that perform really worse with random I/O it will be hard to measure FBS benefits anyway?

I have few nvme but no sata SSDs. I'll test it out if I'm lucky enough to access SSDs. there was a change few weeks ago, but it's on service.

That's great to hear. Now that we as community (mostly you) done the work to show the benefits it's time to hand over to SBC manufacturer to figure out how to patch kernel/DT to negotiate FIS-based switching only when available (there are SATA PMs like JMB321 that are only capable of CBS). At least SBC manufacturer can contact Rockchip support so now they should do their part of work.

That's exactly one of those use cases where even with spinning rust a performance boost is to be expected: mixed read/write workloads. And the best: it's not a synthetic benchmark but some real-world task that should be finished ASAP to save the user's ass once a failed disk needs to be replaced

tesed with 6 WD 12TB disks. PM can handle 5 disks, last one is used for swap and run resilver.

I took your RAIDz numbers and added it to the end of RK3588/Rock 5B SATA section: https://github.com/ThomasKaiser/Knowled ... 5B.md#sata

It should serve as a hint for SBC manufacturers using RK3566, RK3568 and RK3588 (ODROID M2) that when exposing SATA they also should get things straight software-wise and enable FIS-based switching since other than public perception SATA PMs are fine for attaching a bunch of spinning rust to a single SATA port... but surely not with CBS

@zupet: I guess you knew the request would be coming...

sorry. I just ordered this one today.

Sorry, the page you requested can not be found:(

Sorry, the page you requested can not be found:(

how about this link? product is

you can find it at IOCREST Official Store.
Top
Post Reply
24 posts • Page 1 of 1