This is how to assign the 4 cores to Pianoteq on startup (2,3,4,5 are the 4x high-performance cores).

When Ubuntu-MATE was doing the core load-balancing, it did a poor job. Ubuntu-MATE mostly overloaded the first 2x low-performance cores and under-utilized the 4x high-performance cores (grrrr ...). Eventually it would re-distribute the load to the other cores, but for live music, it was too slow. By the time it figured out there was an "intense musical event" happening, it was too late, the moment had passed. Performance in Pianoteq was sub-par, the program was always gasping for air.

After the 4x cores are assigned to Pianoteq, it gets super-charged, performance sky rockets. There are still polyphony limits with the Odroid N2+/Amlogic chip, but for everyday playing and performance Pianoteq runs better on the Odroid N2+ than my 2013 MacBook Air (i5-5250U). 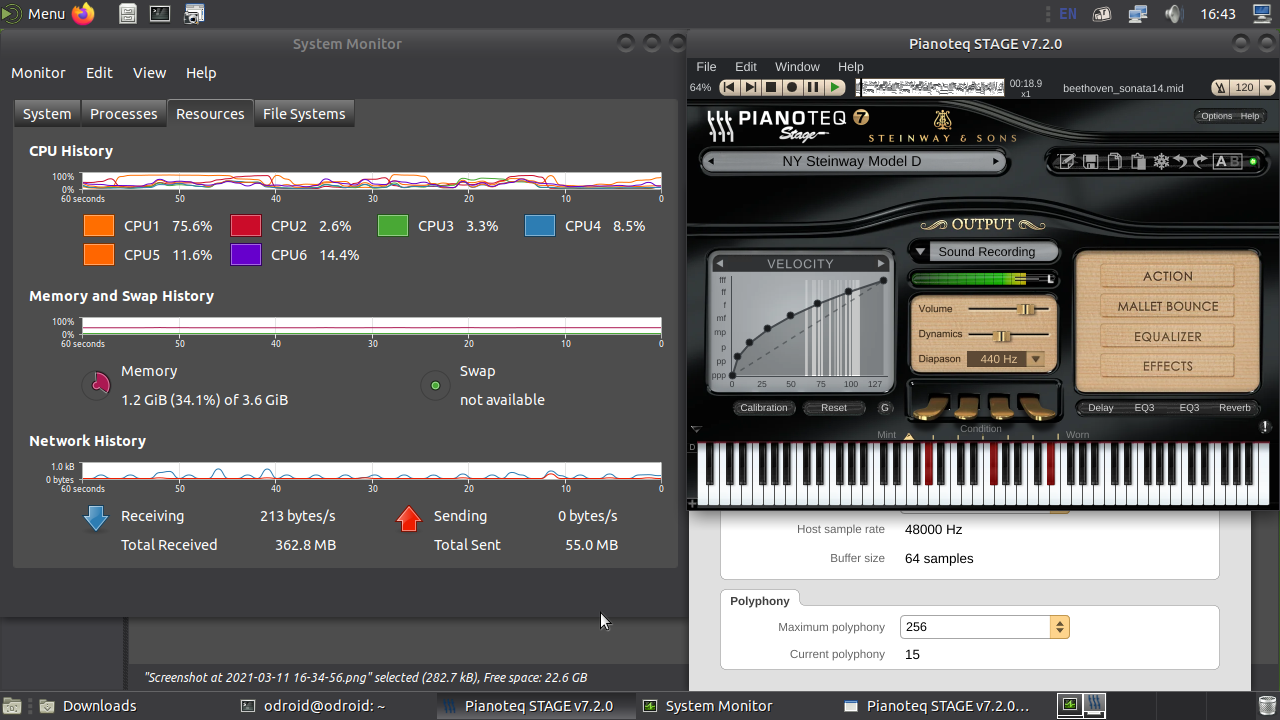 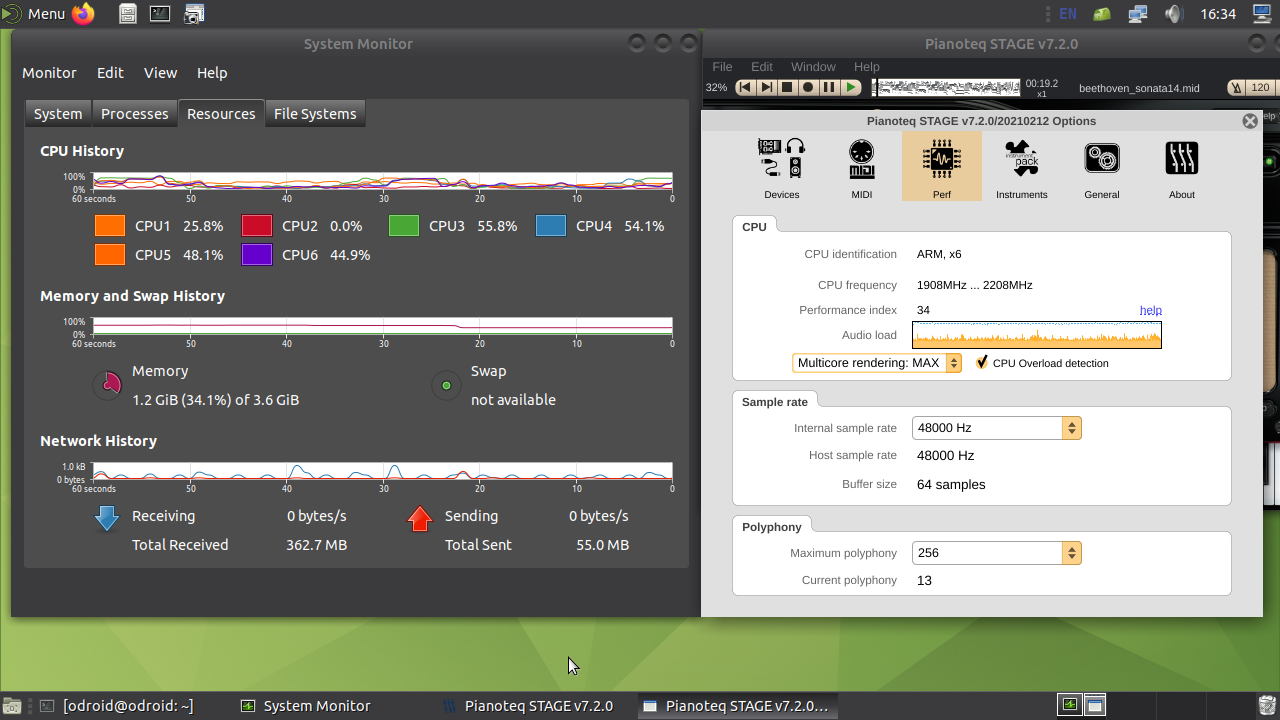 Here's a comparison of the internal Pianoteq Performance Index, before and after assigning cores.

Before assigning cores to Pianoteq, the program is gasping for air. Take a look at the Performance Index/Audio Load graph. The blue line represents overall CPU availability, in real-time, that line keeps fluctuating between 18-35, depending how Ubuntu is feeling. The orange graph represents the audio load, as you can see it's exceeding CPU availability. RED lines are basically x-runs/drop outs.

note: I'm running Pianoteq full blast, with all the settings at MAXIMUM. 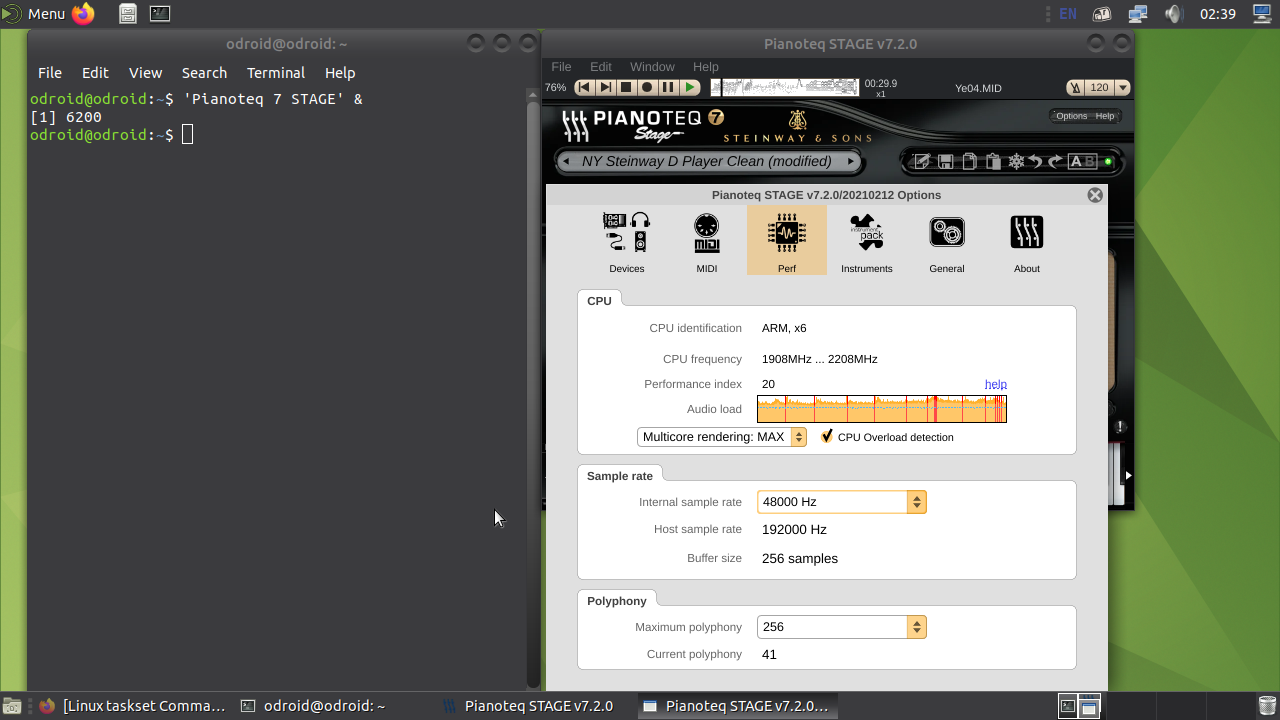 After assigning cores, Pianoteq runs solidly at a Performance Index of 34 with only small fluctuations (30-35). Notice the blue line is pegged to the top of the graph, which means CPU cycles are readily available for Pianoteq. In real-time, the blue line basically stays there, only rarely dropping a few points. Notice the orange audio load is more efficiently managed and well below the blue line. There are still occasional x-runs, but rare. The main limit is polyphony. The Odroid N2+ performs solidly up to around 128 polyphony, above that, it begins to run out of gas.

note: I'm running Pianoteq full blast, with all the settings at MAXIMUM. 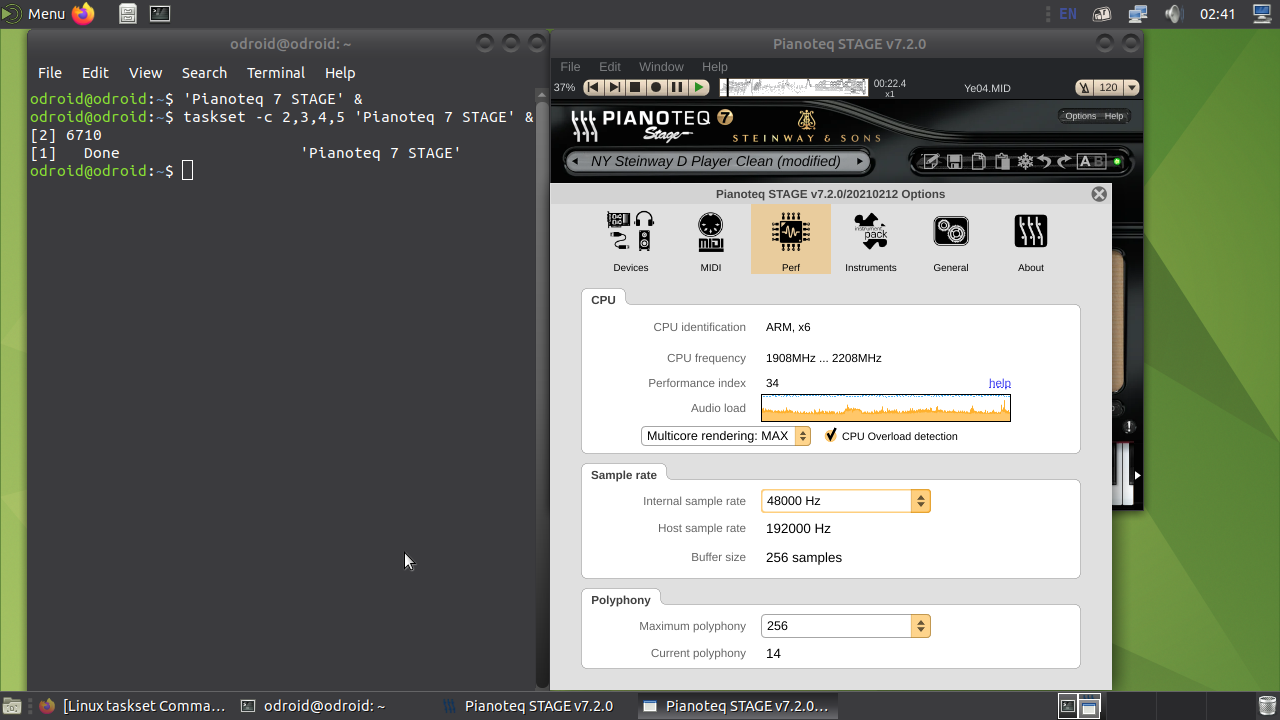 Here's an example with the 3rd Movement of Moonlight Sonata. Pianoteq is running full blast, with all the settings at MAXIMUM. Notice the Performance Index mostly stays pegged at 34, rarely fluctuating. There were only 5-6 minor x-runs/drop outs, not noticeable from the playback. notes: MIDI file is from the Yamaha Signature MIDI Collection. Performer is Scott Meek.


Here's an example with La Campanella where the Pianoteq/Odroid N2+ crashes and burns. Pianoteq is running full blast, with all the settings at MAXIMUM. The playback is clean up until 4:10 where the polyphony soars to 190+ and crashes the playback. notes: MIDI file is from the Yamaha Signature MIDI Collection. Performer is Liza Ali.

Thank you for sharing the information about how the 'tasksel' command is useful for musicians as well as engineers.
ARM's Big-Little architecture and Linux Kernel load balancing algorithm still seem to be quite unbalanced.

BTW, consider overclocking the CPU clock from 2.2Ghz to 2.4Ghz to increase the number of polyphony to 200+ if 4GB system RAM is not a bottleneck.
https://github.com/mdrjr/n2_bootini/blo ... ni#L77-L85

I added this to my ~/.bash_aliases on my XU4, it can easily be adjusted for any device.

Then you just run a command:

This has served me well for years