Being able to use the Odroid-N2+ Turbo Fan on the first generation Odroid-N2 would be beneficial but the different hole patterns doesn’t make it easy. Starting with the original N2 Fan Stand, the code for an adapter was added so that the N2+ Turbo Fan can now be mounted on the Odroid-N2.

One set of holes collide so only 3 screws attach the adapter to the N2 heatsink, it’s sufficient. The N2’s total height using this adapter is 62.5mm from case top to feet bottom compared to the N2+’s of 51.7mm, a difference of 10.8mm. The overall height can be further reduced by 3mm-6mm but the N2’s pcb mounting pins are tall and restrict getting closer to the heatsink without changing them for shorter ones or screws like on the N2+.

A small hole in the front cover will allow the fan wires into the case while letting the case close all the way. Notice the fan feed and wires are at the side of the N2 which allows for the best concealment. It may appear at first that the fan wires are too short and need extending but, if the connection is made first and then that fan mounted to the adapter, they are long enough. 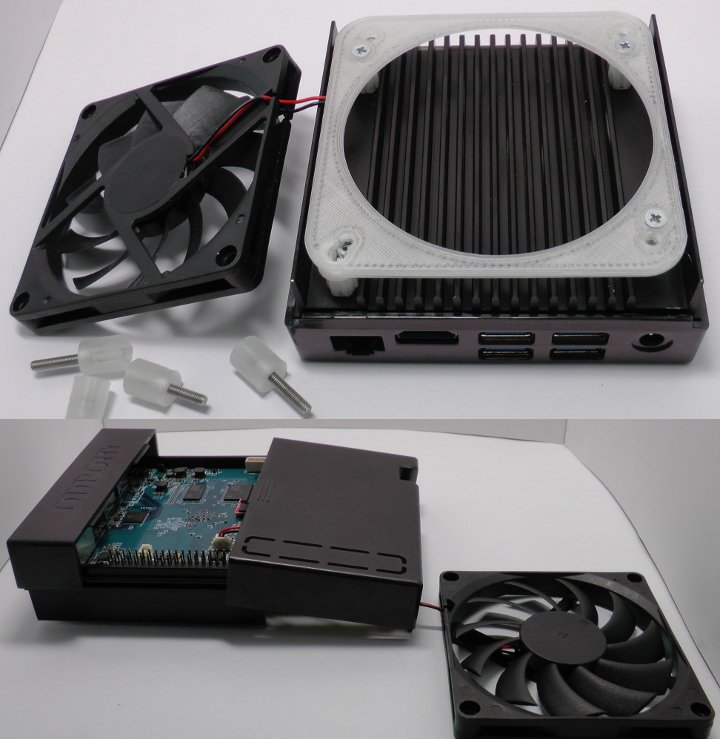 Once your setup you can test the fan by lowering one of the two thermal trip points. Trip point 4 is approximately 50% speed and trip point 5 100% speed.

Once again nice work, I can barely imagine needing a fan but I could see it coming in handy on a long compilation job.

I need to get into OpenSCAD, I've really only used FreePySCAD a little to create custom supports in SuperSlicer.
Top
Post Reply
2 posts • Page 1 of 1