I have an Asus PB277Q and when booting my new ODroid N2 (with various Android images) the screen alignment on the monitor is offset and wraps (see photo). The image also has a slight jittering effect as if it is not quite stable as well. I have tried another monitor and TV which do not have this problem. I'm hoping someone has seen this issue before and there's an obvious fix, I'm just beginning to explore the device. Thanks! 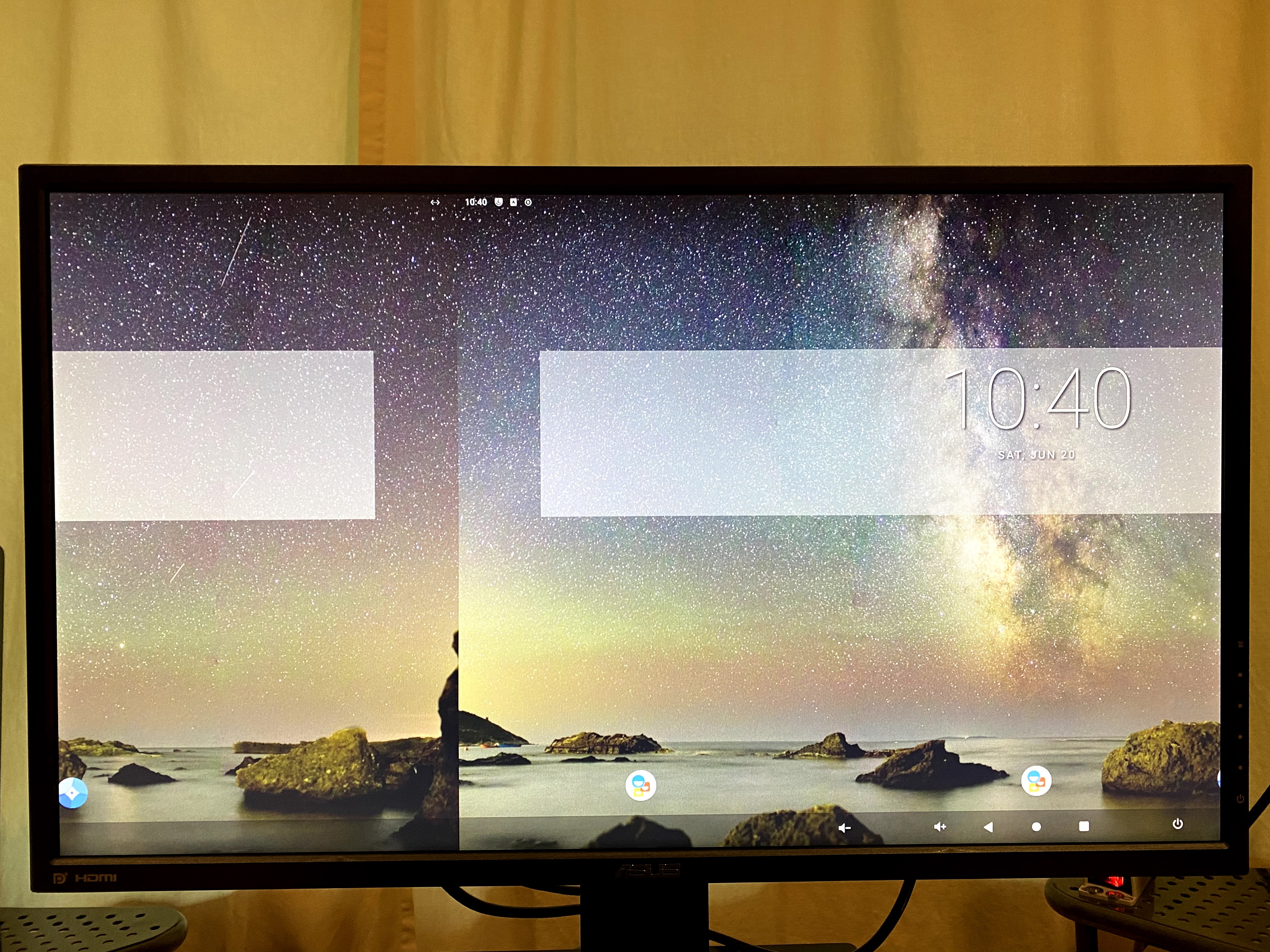 Try selecting HDMI 2560x1440 resolution on the ODROID-Utility app and reboot.
And let us know the result.
Top

On a fresh install of the 20200618 image I was able to get the wrapping to go away but a few questions remain. The system defaults to AutoDetect screen resolution, but when setting it manually (in ODroid Utility app) 2560x1440 resolution was not available (even when toggling the unsupported resolutions switch). When changing from autodetect, the radio button is selected by default on 1080p60hz, but it doesn't appear to take a effect. I had to select a lower resolution 720p60hz reboot, and then repeat the process for 1080p60hz to get it to that resolution. That setting is stable and works as expected (the 50hz versions had the screen jitter)

and played with various combinations of those settings, but on reboot the monitor is reporting the resolution as 1080p60hz and to my eyes it still appears that way too. Is it possible to get to the higher resolutions? I'm trying to follow this Display Mode/Resolution wiki article

Also, I tried a few other OS images, namely LineageOS 17.0 which exhibits the same wrapping issue, but don't have resolution settings (as far as I can tell) Is anyone aware of similar steps that can be taken in other distros? Thanks!
Top

BaronWilhelm wrote: ↑
Tue Jun 23, 2020 12:21 am
Also, I tried a few other OS images, namely LineageOS 17.0 which exhibits the same wrapping issue, but don't have resolution settings (as far as I can tell) Is anyone aware of similar steps that can be taken in other distros? Thanks!

Install CoreElec https://discourse.coreelec.org/, on an uSD card to see if you'll have all possible resolutions your tv/monitor supports (reports to support).
Follow this Install Guide: https://coreelec.org/#download
Top

CoreElec shows this list of supported resolutions. It did show up by default on 1920x1080p and the display is correctly aligned. Other than the non 2560x1440 it is correct out of the box.

Thanks for all the help and support! I am enjoying tinkering with this guy a lot.
Top

It seems LineageOS is able to get to non-wrapped display via the same steps as ODroid rom. I have a solution for the wrapping, but what's the explanation for it's occurrence?

I share this monitor with a Ubuntu laptop hooked up via HDMI max res is 2560x1440. Only ODroid N2 can't get max res.

2560x1440 is QHD (quad high definition) not HD or UHD TV resolution. To display this typically PC monitor resolution you probably have to do some editing...

In CoreElec config.ini you have a section for custom HDMI modes:

Tried to edit boot.ini to use a manual setting, as described here. Using these settings:

Based on the working PC xrandr output

but it's like those settings weren't affecting anything. The unit just remained at 1080p, the ODroid GUI utility is all that seems to matter. Suggestions?

Edit:
The supported resolutions table, seems to indicate that Android 2560x1440 is not supported on the N2? If so, maybe this makes sense. N2 Ubuntu image does work at 2560x1440 by default.

I still am not sure why the wrapping occurs or why the 720<->1080 hdmimode changes in boot.ini don't seem to take effect.
Top

but it's like those settings weren't affecting anything. The unit just remained at 1080p, the ODroid GUI utility is all that seems to matter. Suggestions?


I'd try leaving boot.ini as is and edit config.ini to see if that would work...
Top

Found it! It turns out there are duplicate display/resolution settings in /odm/env.ini but these are the ones the system is actually loading. Changes here are reflected on reboot, there is also an entry on line 50:

which is very close to the modeline I generated myself (above). Setting everything to "custombuilt" etc... and enabling this will boot into 2560x1440 resolution. I also did some tinkering with the modeline values and found that, unsurprisingly, the vsyncstart and vsyncend were responsible for the wrapping. I'm not sure why the auto-detect is not returning correct values to begin with, but I'm satisfied I understand why this is happening and can configure it to work as intended.

Thanks for the debugging ideas!