Hi, I’m planning to build a mini NAS with 4 2.5” SATA drives and I’m wondering if I need an extra power supply or if I could use the ODROID H2+ SATA power to feed them all.
The startup consumption of each drive is 1.2A on 5V, while the average power is 2.1W during write operation (1W when idle).
Comparing those numbers to a good 3.5” drive seems that it could do... does anyone know the power specs of those connectors?
Thanks.
Top

Wow! Thanks! It's even better than I thought!!!
Top

Is anything overheating? Or you use a fan in your system?
I'm really surprised on how strong this board supply is!
Would you send a picture of your system and the cable you are using?
Top

Yes, no problem. I take some pictures now

Here is some fast pics of my test bench, the cables are 2 sata splitters,1sata -> 4sata 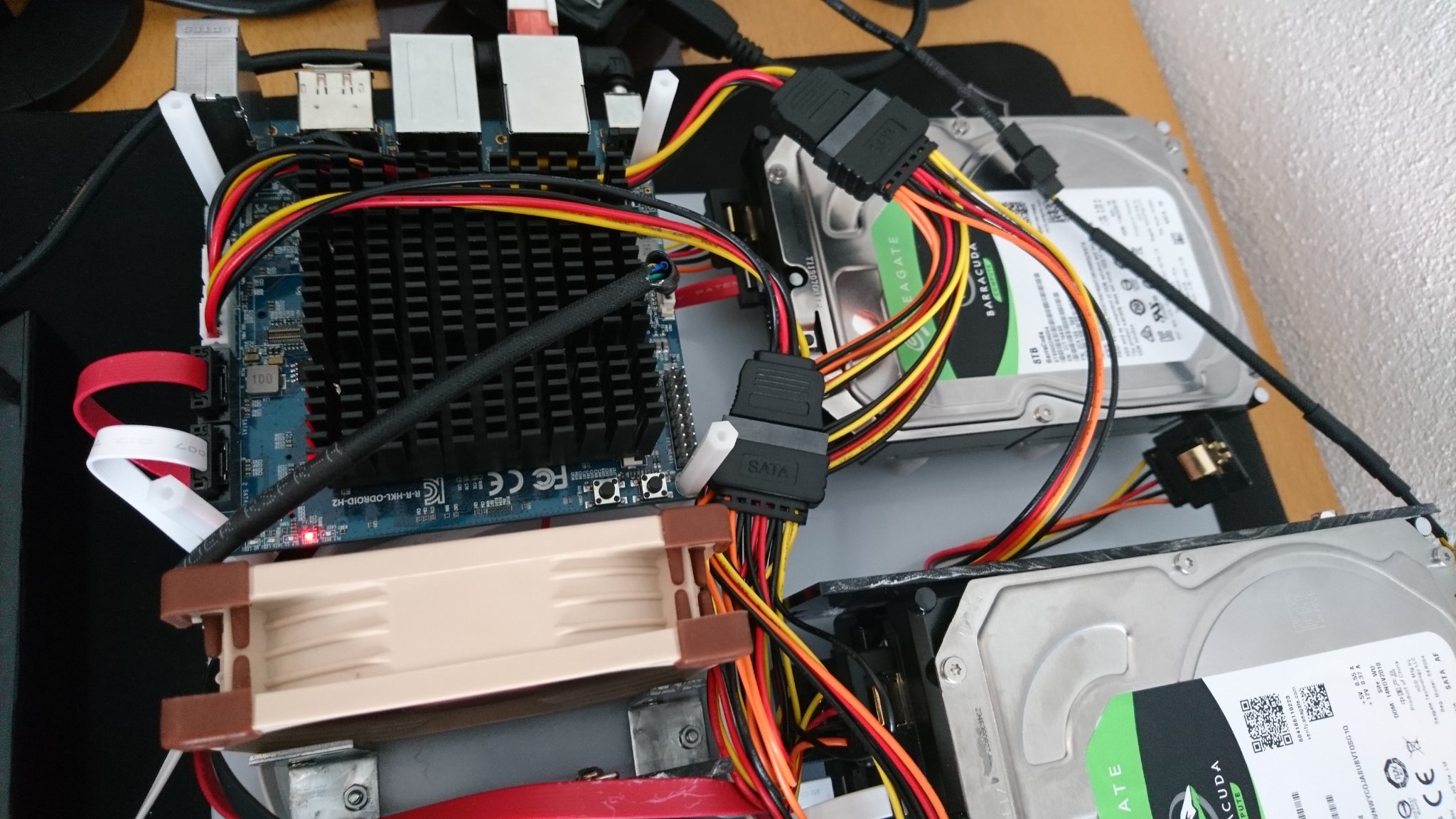 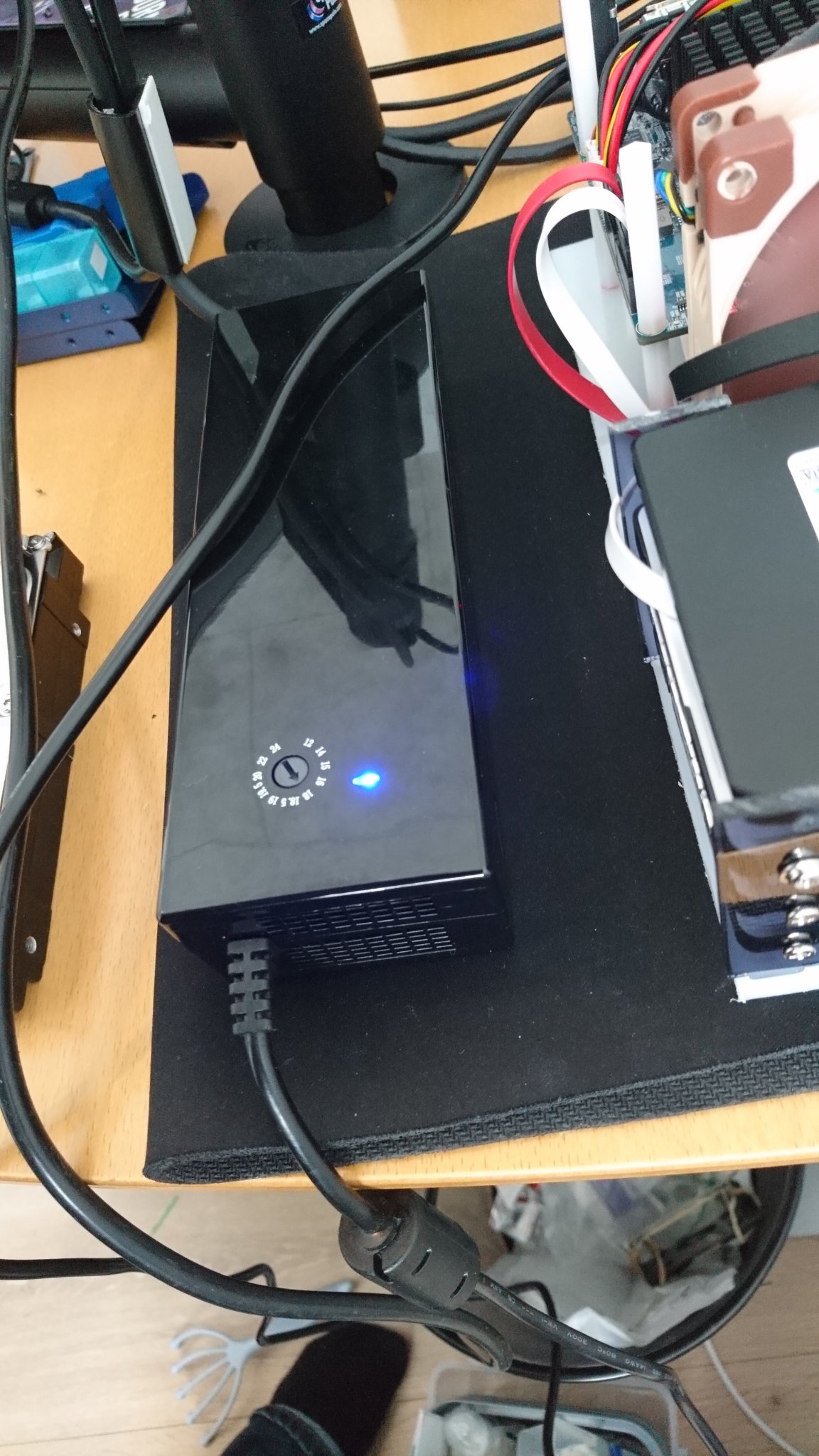 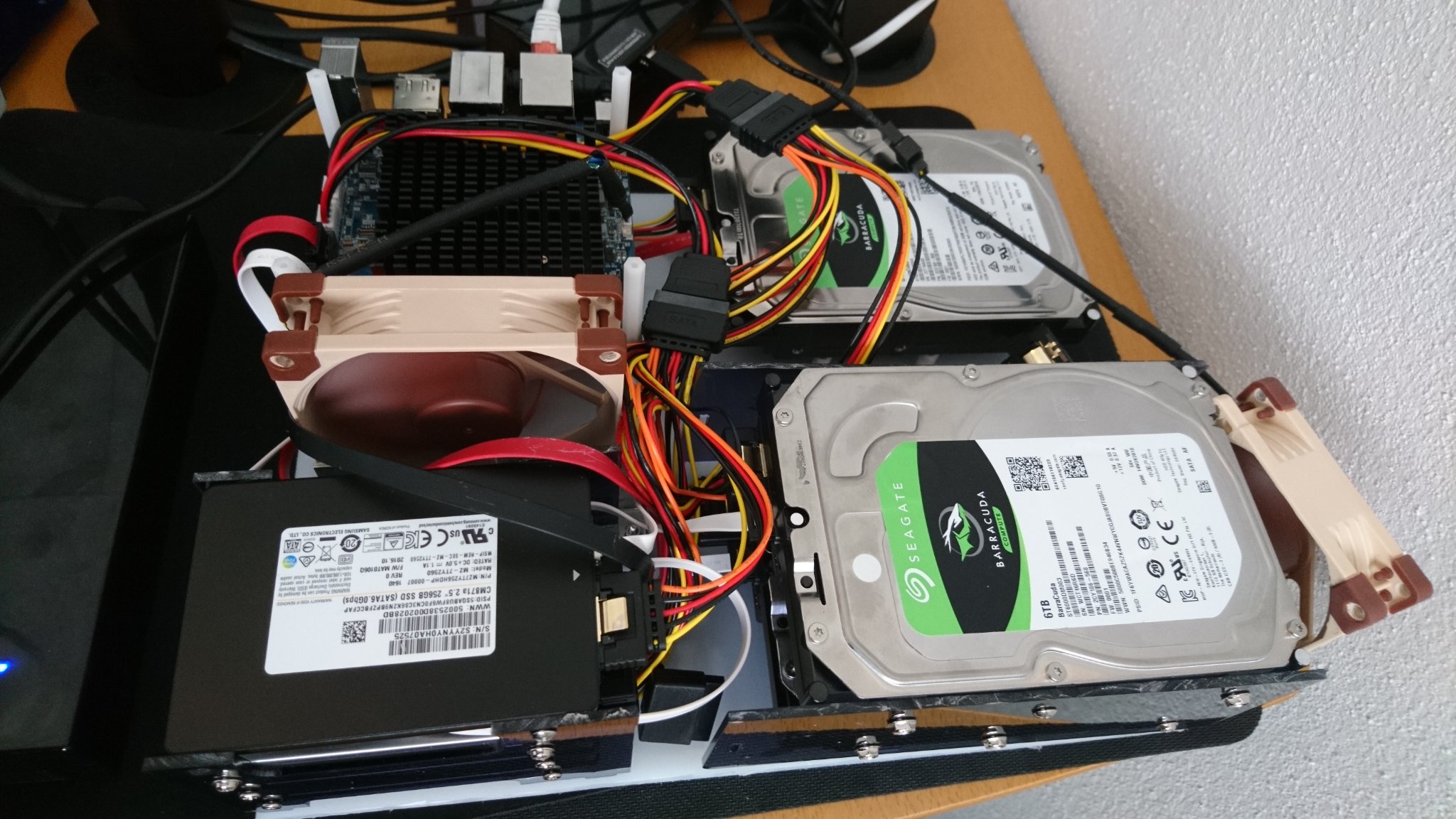 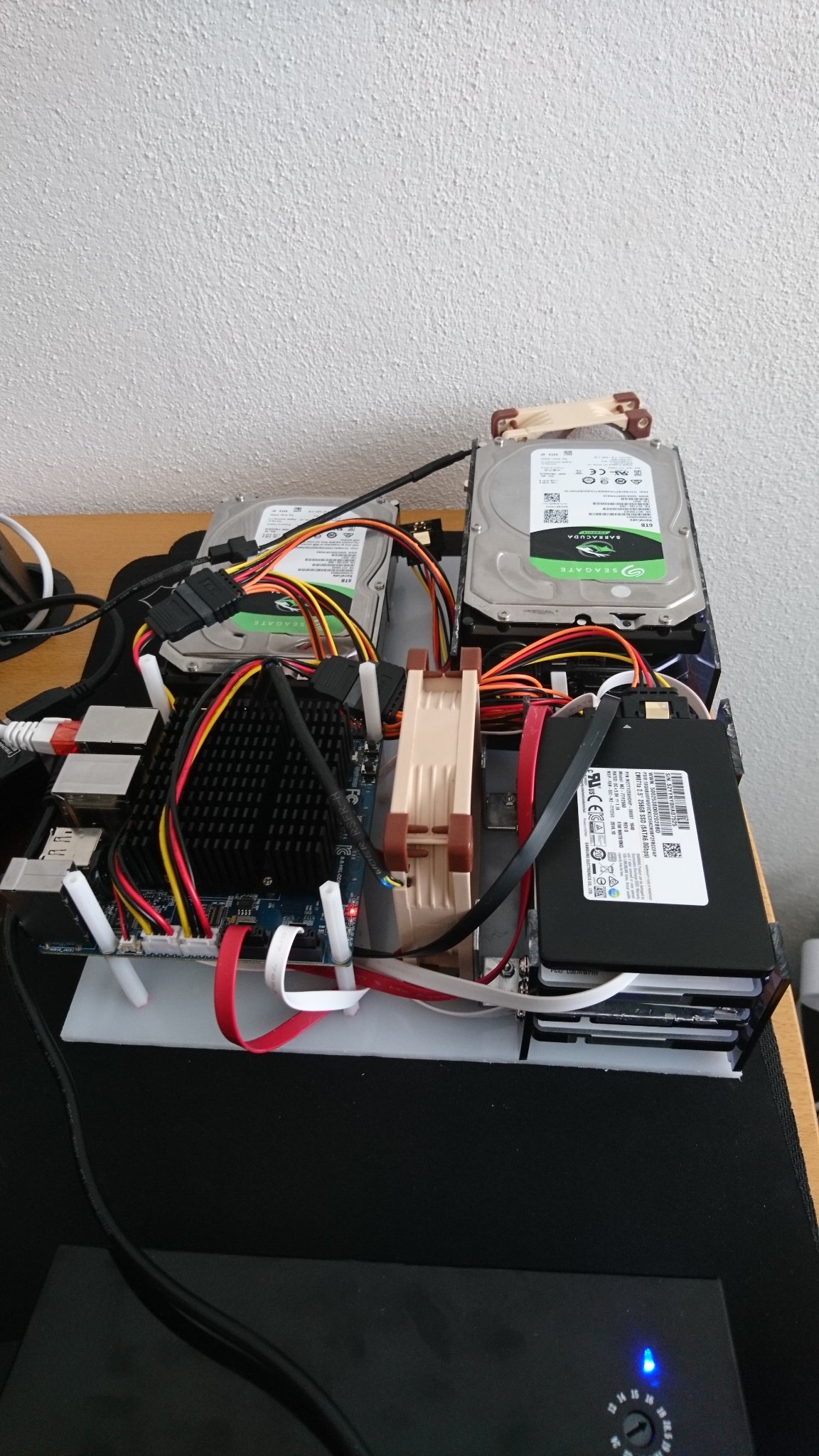 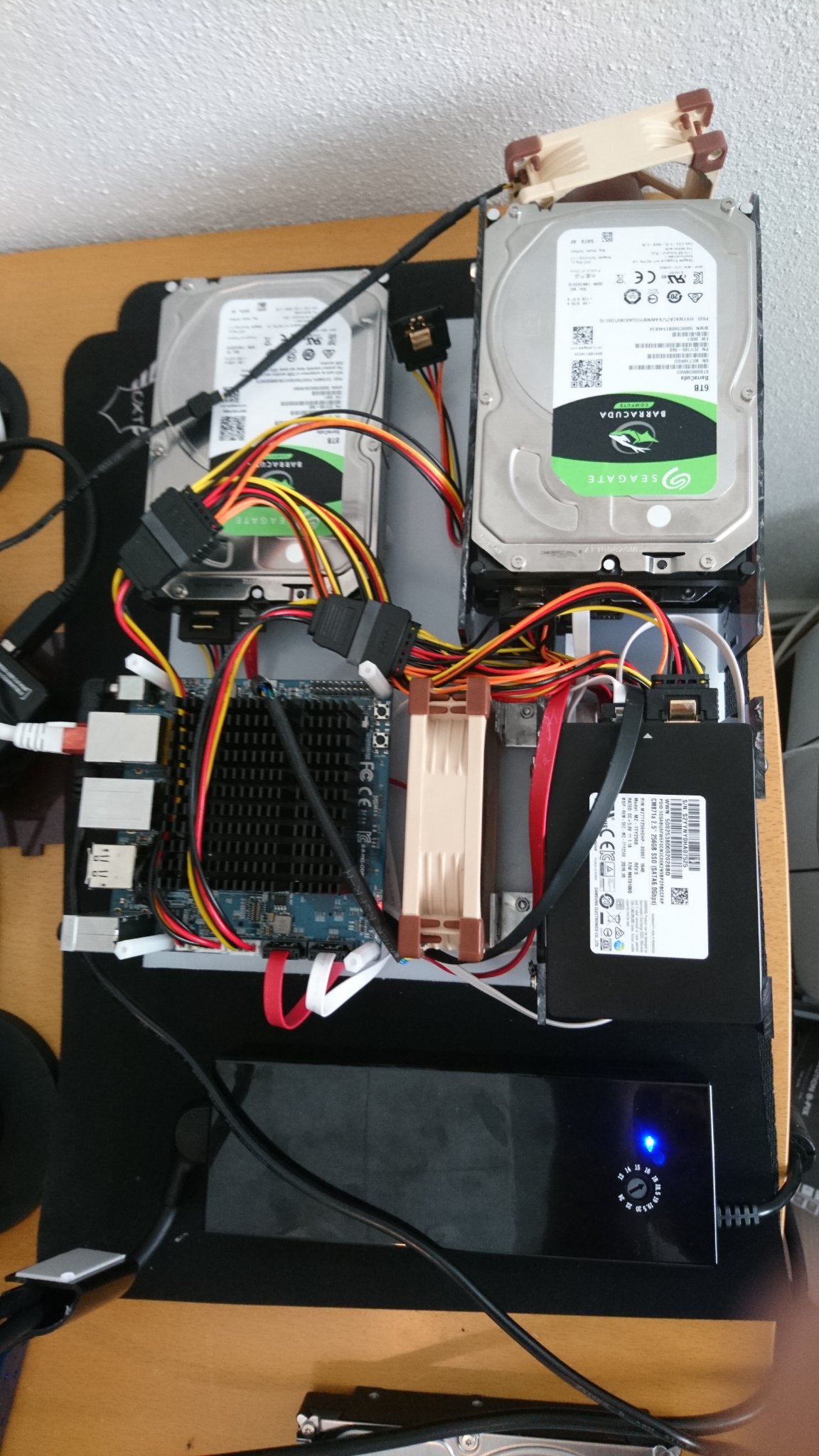 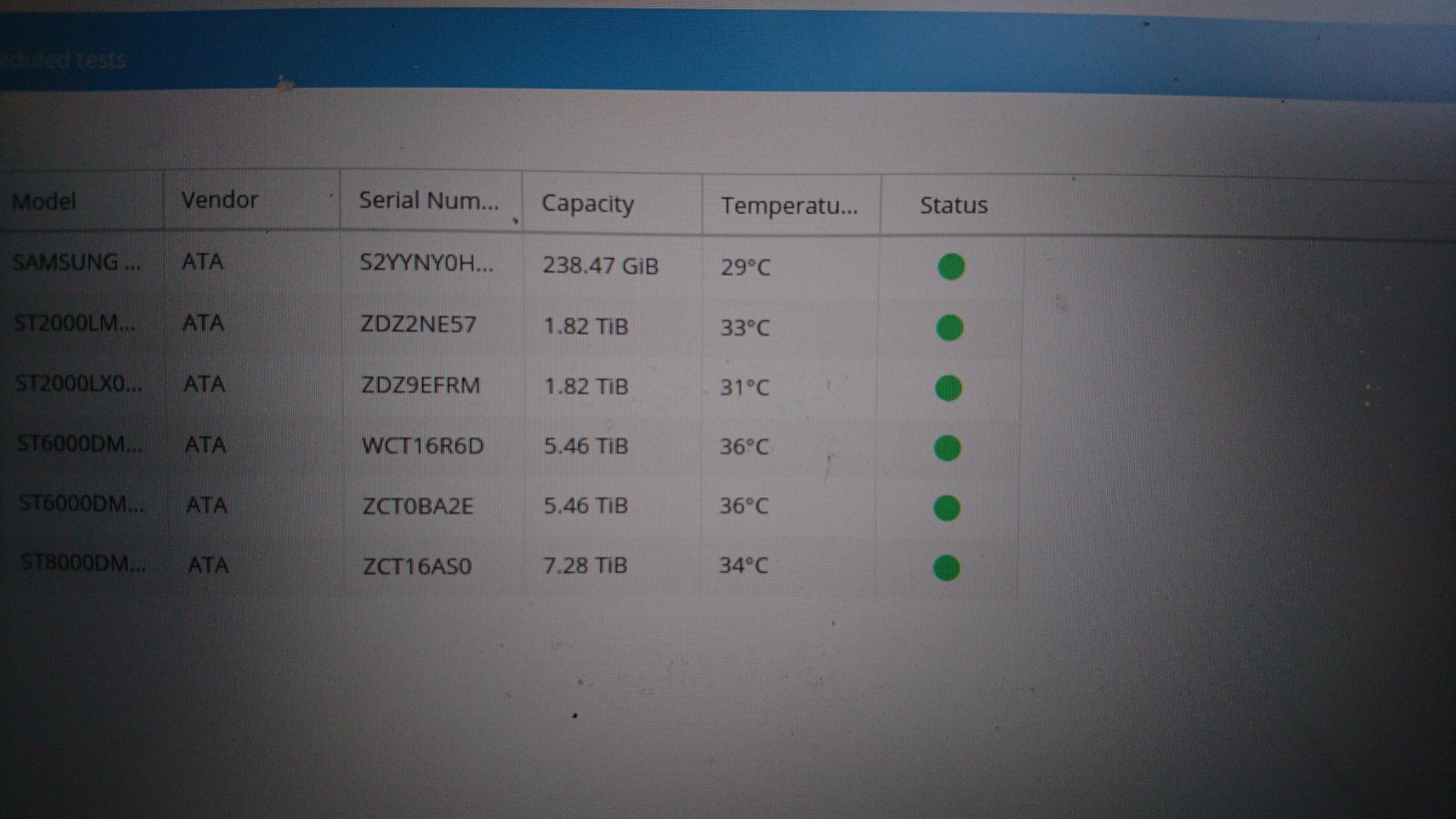 Thanks!!! I was curious about the cable. So you have a spliter for the SATA power. I'll look for that cable to buy!

Now I only need to know if the default power brick will be enough for my needs, but I honestly don't believe it will not be enough.

To answer your question about 4x 2.5" drives with the standard psu, i think it is no problem. I have been running 2x 3.5" 10TB, NVME and 1x 2.5" SSD, with no problems at all (I have tried it and it works, i have not calculated anything)

@snowtim,
No.
3.5inch HDD takes up to 20Watt or slightly more when the spinning motor starts.
Our max budget design on the H2/H2+ 12Volt output rail is around 45Watt to support two HDDs.
If your HDD requires a lower peak current, you can connect 3 HDDs probably.
But there is no way to drive 7 HDDs if you don't use a separate HDD power source.
Top

@snowtim - i will agree with @odroid i don't think it is possible, it sounds like a pretty wild project. Have you bought all the needed stuff?

Maybe some small green drives or so, i run with the setup from the pictures. 6 drives total. I will not recommend it, but i have not had problems with it.

@odroid - if the current exceed the limit, what will then happen?
Top

There is an over-current-protection feature in the 12Volt Buck converter IC.
If the current exceed 6Amp, 12V output rail is disabled until the load is lower than 6Amp.

There are reasons why the SFX PSU solution is good/better depending on wattage (*):

(a) A quality SFX PSU does not leak much current when devices are off. No so with power bricks, a consumer grade power meter can show 0.5W consumption with power bricks basically doing nothing (but connected to devices).

(b) For a good quality 12V rail with not significant variations, you usually want to have the average wattage when running everything you want to run at half the capability of the PSU or power brick. In doing so, possible variations at the wall do not often translate in variations of the 12V output. I guess the capacitors still have enough reserve to compensate. This, in my experience, prevents these so-called unexpected pattern-less dysfunctions or crashes.

Analogy: you know your car engine is already at 90% power when driving at 120 km/s. You're behind a car driving at 115 km/s on a two lanes road. You'll need to pass the car pretty fast because there are cars coming from the other direction. Do you attempt to pass? Probably not because you just have a differential of 5 km/s and you know your car engine will be very slow to provide the remaining 10% of power increase. On the other hand, with you driving at 60 km/s behind a car driving at 55 km/s, you will confidently pass the car because you still have plenty of acceleration reserve. Same thing when choosing a power source!

(*) Plus an ATX breakout card if you do not want to cut the cables of the PSU for distributing the 12v to the H2 board.
(**) The main culprit are the disks spinning up. And because for a NAS you want the disks to spin down where there is no activity, these disks need enough oomph to spin up again and again. So this is not only about the initial power up.

Disclosure: I am NOT and electronics nor SBC expert. I just describe what I saw and experienced during hands-on.

@Odroid, thanks for that. @domih, thanks for your opinion about the case. Me myself do not have run into problems with my setup. But it is not er permant solution only on the test bench. I am in the middle of putting the H2 in a Lian Li cabinet, hope to get finished later today.

Hi just done with putting my setup in a Lian Li PC V33 - with some random 520watt Inter-Tech psu(Hugh overkill, but it was cheaper than the most other PSU). And it seems to run pretty nice also

I think the idea of the OP has not yet been fully explored.
Given only 2.5" 5V 1.2A peak drives, so basically all Seagate 2.5" 5TB drives, the most startup power demanding consumer 2.5" drives(?),
how many of those would one be able to connect to the default power brick?

Using a M.2->4xSATA splitter and the original 2x SATA sockets, in total one could connect 6x of these 5TB 2.5" drives to one H2,
would the H2 power circuits and power brick (or a stronger Laptop 19V one?) be able to handle that?
Top

@fvolk - the power supply i have conneted on the pic is sat to 18V, it is 6 drives. Runs without problems, i think @odroid tolk 6A peak on the 12V rail and a fuse will turn the ports off if it comes over. The drives i use, i think they are pretty power hungry, the 3x 3.5" drives i have poped out of a external case.

Thank you for confirmation, so maxing out on 5TB 2.5" drives requires an external power supply.
I'm just getting ideas, because the 5TB drives are on sale again (~100 EUR)... ;-)
Top

Hi, thanks for all advise.
Would like to know if I use the SFX PSU to drive the H2+ board and 7x 3.5" HDD, then which DC-DC converter should I needed? As the SFX PSU only got 12V output but the H2+ needs 14-20V input. Thanks in advance.
Top

@snowtim - The odroid h2 can run with 12V itself. But only if the sata drives is powered through psu.
Top
Post Reply
25 posts • Page 1 of 1