Hello all, I'm new to Odroid, been running Linux since Redhat 6.2 back in like 1998.
I'm putting this thread up a bit early since my XU4 is still somewhere in the mail system. I have some, (obviously untested) code already and out of sheer boredom I made a spreadsheet to document the pin relationship between the XU4, Shifter, and WiringPi.
I'm also curious if anyone here has successfully used the IOs without wiringpi since there appear to be more usable GPIOs than wiringpi can use.
I'm attaching the spreadsheet if anybody is interested in it.

Thank you for sharing a clear and useful spreadsheet.

Not sure if it matches XU4 (for start you need more recent kernel) but its worth checking https://github.com/sgjava/userspaceio

Thank you odroid, I wrote a pretty simple program to test shifter IOs last night. After it's tested (and bugged out) I'll post it up so future users can hit the ground running and have sample code.
igorpec, Thank You for sharing that, it's really interesting, probably not something I would jump into before I know the hardware better but I'll have to try that later. Probably do another install on an SD card to test it.
Top

I'm going to write a program to test the GPIOs as inputs, there are 2 ADC inputs, ADC#0 & ADC#3, am I correct in assuming they take 0-5V at the shifter and turn the value into a number like 0 - 1023 or something? If so, does anyone have the scale?
Top

Okay! I'm on it now.
So last night I downloaded wiringPi, I compiled just fine, then run the program and:
fatal error: wiringPi.h: No such file or directory
#include <wiringPi.h>

Huh? I did a gpio readall to make sure it installed and got the ascii map, no fair.
Top

Okay! The last couple days sucked, mostly because I'm still a very new C++ developer!
So here's the skinny, my compilation errors were because I wasn't telling the compiler the paths to the libraries. For me compilation with wiringPi on the XU4 looks like this:
g++ ProgramName.cpp -lwiringPi -lpthread -ltr -lcrypt

I wrote a little (like 400 something lines) test program and just finished testing output on all 24 GPIOs.
For the most part it went well, there's occasional glitches with wiringPi where it'll skip some if all IOs are cycled fast like at the end of the program I'm attaching.
Hopefully my input test doesn't exhibit the same trait or this will be unable to take pulse inputs and count without missing some.
It was also necessary to pull all of them low early on as the state is more or less random upon initiation, I suspect there's a way to initiate them low or high when the pins are defined in pinmode() but I've found no reference to it yet.
The code is well commented so it can be referenced easily, and the compilation string from above is in the comments as well.
Also, geany works great on the XU4! The environment that comes native is a bit minimal for my taste so having geany was a big thing for me so I could make tweaks without having to move it back and forth between computers.
Still no information on how an ADC read is used so next I'll focus on simple input then UART and PWM.
PWM can be a thing if I get past serial data, I'll simply program a PIC to do the actual work and use the XU4 as a HMI in that application.
Please remember I'm very much an amateur so please try to be critical without flames if you don't like something in the code.

Here's pretty much the same program doing input testing.
I also noticed the XU4 doesn't pull random pins high at boot like I thought, it's all but 1 every time, it's pin 23 or 24.
Input is a bit odd, all the inputs are high in a relaxed state, there's no pulling them up, only down.
So if you look at my program there's no compare for high since it's a given.
The digitalread can be used the same manner as an int variable, compare it, move it to another variable and such.
Again, new programmer, crude code. If these programs were being used practically Id have to use a string variable for user input, enter a letter and it flips shit and loops out of control, it's useful to prove input works and learn wiringpi usage and that's what I was going for.

Thank you odroid, I can voltage divide down to 1.8, 4095 is pretty triumphant resolution!
It says in the wiki it's 1.8V @ CON10 30 pin header, I have the shifter shield, are pins 37 & 40 on the shifter still 1.8V or is it "shifted" up like the GPIO pins?
I hope it's acceptable that I'm documenting this all here, it's my hope that sharing my learning experience will help future new users to hit the ground running.
Top

Digital IO pins can be shifted to 3.3V or 5.0V.
But the Analog input pins don't.
Top

What I get is no change on adjustment to ADC0, but ADC3 works fine. ADC0 follows ADC3 to within a few percent but adjustment to ADC0 pot yields no change.
I swapped the inputs and sure enough the other pot becomes active on ADC3 so it's not a bad pot or jumper.

Is this something I'm doing incorrectly in code?

Access the ADC0 and ADC3 on the command line via sysfs to narrow down root causes.
https://wiki.odroid.com/odroid-xu4/appl ... rnel_49414

I've been pretty quiet the couple weeks while I focus on C++, but I want to erase my marker board so I figured a picture of the voltage divider to sweep 0-5v would not only be safe here but potentially useful to others.... not that it's difficult to figure out but, hey. 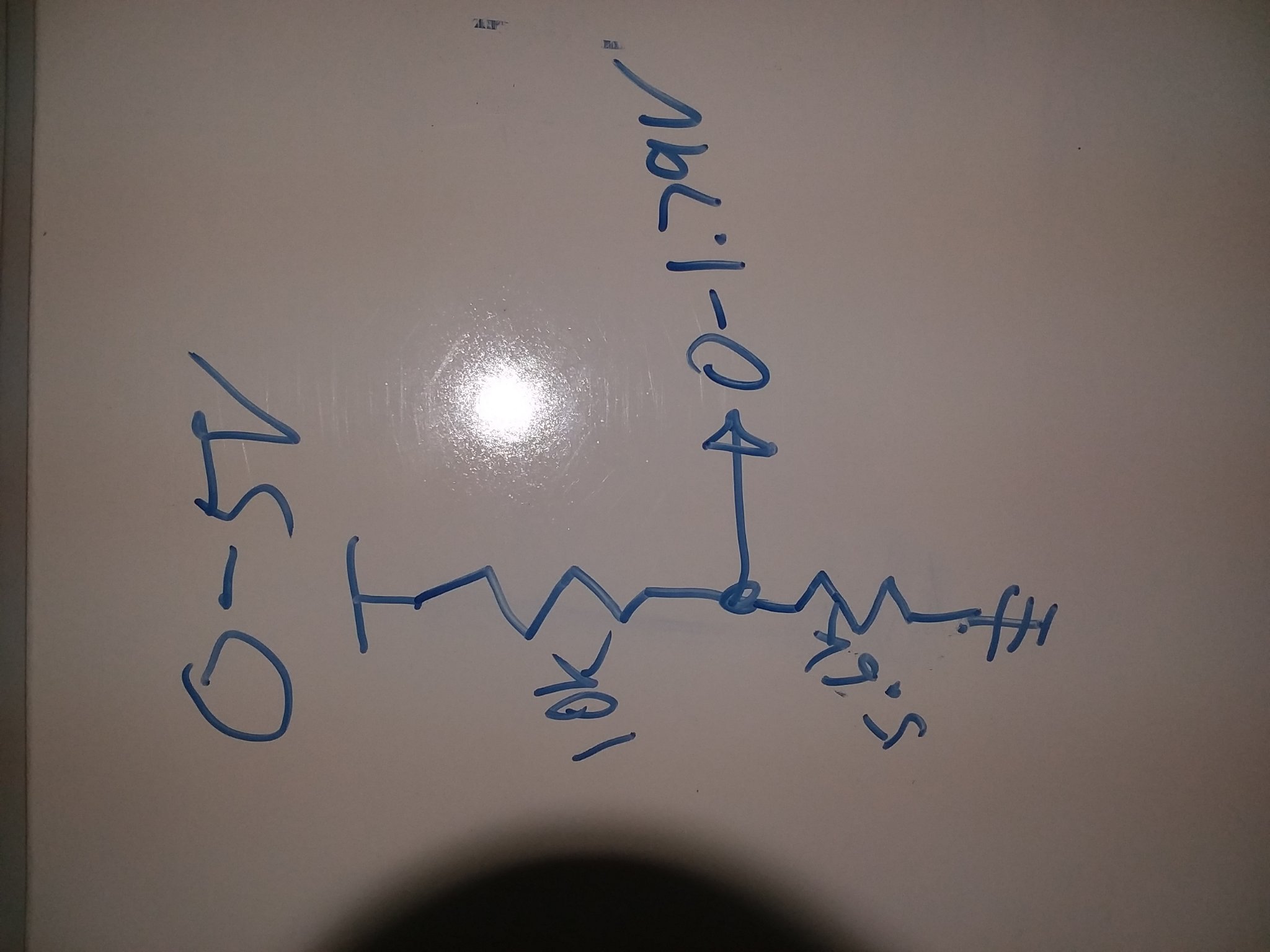