I've ported snes9x to the Odroid GO. Although I consider this very cool, it is very very early in development and it is not currently playable and might never be.

The ESP32 is, on paper, capable of running SNES at full speed. However snes9x is written to be portable rather than ultra efficient on each specific architectures, which limits the amount of optimization that can be done short of rewriting it. In other words my experiment will probably never run perfectly but I will push it as far as my skills allow me to!

Odd that there's still no replies.

I'll check this out tonight, from what I remember from early emu days, Uniraces was a pretty low req. SNES game so maybe benchmark with that?
Top

I must admit, looks impressive...

I seem to be struggling to get more than 15fps doing very little, never mind emulating anything
Top

I couldn't expect a running SNES on the GO even it looks quite slow at this moment.
Top

I've made some modifications, it is running a bit faster! Still not playable unfortunately. Video has been updated as well as the zip.
Super Mario World is currently running 3.5x too slow and in the previous build it was about 5x.


lordhardware wrote: ↑
Mon May 27, 2019 2:20 pm
I'll check this out tonight, from what I remember from early emu days, Uniraces was a pretty low req. SNES game so maybe benchmark with that?

Uniracers doesn't seem to run but I didn't investigate why yet. The game starts but eventually black screen.

Edit: Uniracers DO run now, but as slow as you can imagine

This is a quick update to let you know that I will stop working on this project. The biggest reason is that I cannot figure out how to profile function calls on the esp32 (or if it is indeed possible). The snes9x execution flow is pretty complicated so manually adding tracking code proved to be futile.

If anyone is willing to teach me how to profile function calls on the esp32 I'd be very happy to have a second look.


But for the record, and if someome wants to pick up where I left it, here's a list of things I've tried or considered so far:

I downloaded Neil Kolban's Book on ESP32. I haven't read much of it, because my time with the ESP32 and go have been rather limited, but there's a section on debugging, and it sounds like there's no profiling type tools available, just output logging.
Even though i haven't read much of it, I'd probably recommend it, as what little i have read seems very thorough.

I'm impressed you got add far as you did though
Top

I used this admittedly low-tech method when I was testing some performance improvements to the NES emu:

fileoffset wrote: ↑
Mon Jul 22, 2019 7:23 pm
I used this admittedly low-tech method when I was testing some performance improvements to the NES emu:

That is good advice. I used a similar method with esp_timer_get_time(). The problem was that the SNES codebase is fairly large and what I need is the total time spent in each function (the sum of all its calls) and tracking them one by one is a total pain.

I've been experimenting with gcc's -finstrument-functions recently and the results are promising. Here's what I wrote so far:


It doesn't handle nested calls and stacks and it is probably slower than it could be. In fact the emulator with the tracing functions doing NOP runs about 50x slower. Which is fully acceptable, but when I add my code it jumps to 1000x slower, it takes 15 minutes to reach title screen in SMW 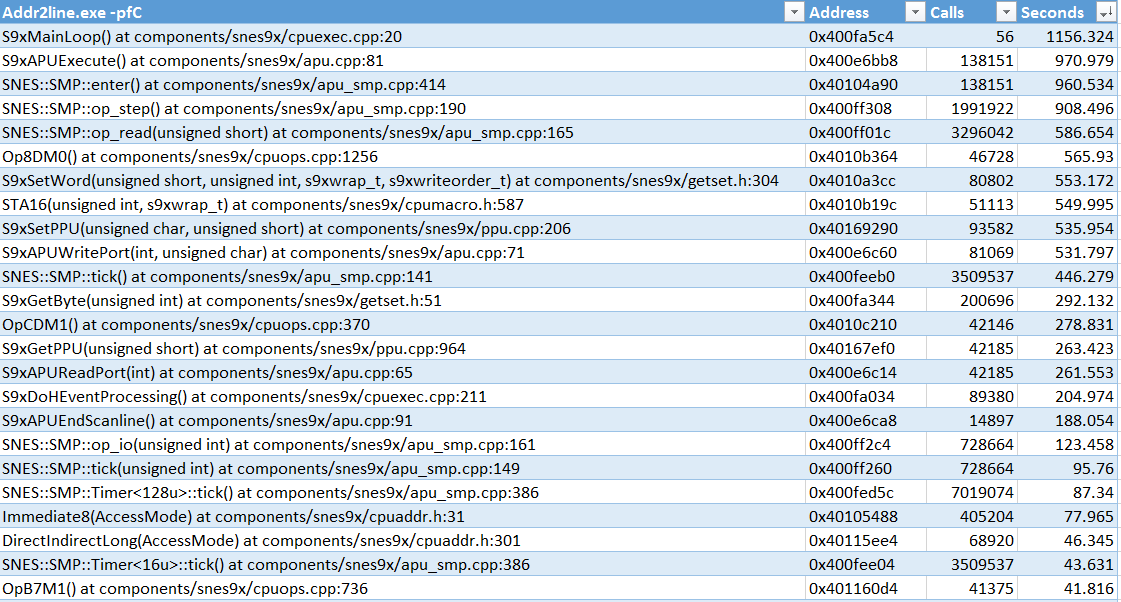 I haven't tested this so YMMV but something like this might speed it up, and isn't a big change:

Keeping a stack and simply popping it in func_exit certainly makes more sense than my loop!

Thanks, I will try it, I'm sure it will provide a fair bit of improvement.
Top

Using the additional RAM is possible but it requires more work because it is accessible only through bank switching. Since the emulator isn't playable I don't think it is worth the effort at this point

I cloned the repo and I'm trying to build it, but get several errors in main/snes9x.cpp:
https://pastebin.com/C4cd0u90

The repo only contains one commit, is this correct? Did you push your last changes?
The only commit is from 30th of May, but you seem to have worked on it another ~2 weeks after that, judging from correspondence in this thread.
Top

You are absolutely correct, I tried several things for a few weeks before giving up, but nothing ended up being worth committing unfortunately.

The multitude of config errors suggest to me that you might be using the newer esp-idf 4 or master when this project was made with 3.3.
If you are doing only GO stuff with esp-idf then I suggest sticking with 3.2/3.3 as most projects are still using 3.x.

But if you need or want 4.x for any reason then I have some free time this weekend, I can try to get it to compile to give you a start.
Top

ducalex wrote: ↑
Thu Dec 12, 2019 1:21 pm
You are absolutely correct, I tried several things for a few weeks before giving up, but nothing ended up being worth committing unfortunately.

The multitude of config errors suggest to me that you might be using the newer esp-idf 4 or master when this project was made with 3.3.
If you are doing only GO stuff with esp-idf then I suggest sticking with 3.2/3.3 as most projects are still using 3.x.

But if you need or want 4.x for any reason then I have some free time this weekend, I can try to get it to compile to give you a start.

Yes I just took the latest IDF, as I have never developed for this platform before. Following their latest version we can at least in theory gain performance: I personally really like the ordoid-go platform, you get so much for so little! If we can get snes to run enjoyably on ESP32s, maybe there could be a snes-button-compatible version of the go with a newer esp32 that also brings other improvements (Isn't the lcd bandwidth limited? I think I read it was only possible to run it at 45Hz?). Anyway, I would be totally interested in a 'new' go platform like that if there is enjoyable snes support.

I will take a look at the errors and try to port it to latest idf on Monday, are you sure the code builds? If you could make sure that it builds with your idf in beforehand, that would be super nice

porting it to newer idf would be a nice task for myself. Ideally multiple idf versions would be supported, to simplify distribution. Maybe we can just have multiple sdkconfig files?

Of course there is value in committing, just keep the master branch clean and buildable and do development/tuning/tests in separate branches. Once you are happy with something, merge to master and if not you can let it live in its own branch for historical purposes. The list of things that you tried (viewtopic.php?f=159&t=35143#p259471) seems like a good place to start, you seem to have done valuable work which would be nice to have if someone were to continue.

I have a few questions/comments, I hope it's ok

1. "Moving PPU-rendering to second core"/multi-threading - So you moved the PPU-redering to a separate thread? If the hardware can be modeled with threads and emulate correct, this seems like a great idea. This would have been nice to have in a separate branch. This would give me (as a programmer with no former experience from emulation) an idea of how I can contribute.

2. "Reassess the types used everywhere." - This seems like a valid approach as long as it doesn't compromises the correctness. One could do this opportunistically when developing feature X. (You can have two instances of the git repo checked out, one working on feature-x branch and one working on a branch which does this kind of aggressive optimizations. This branch will rebase on master and can be called 'testing' and include experimental optimizations, once you collect statistics if the changes were in fact valid it can be merged to master. In fact I would opt for this workflow for all features. First merge to testing, and then when we have runtime statistics that it is ok we merge it to master)

3. Dynamic recompilation - I am not sure if I know exactly how this works, but maybe you can verify if my theory is correct: since we have two cores this would mean a lot of performance gain as the dynamic recompiler can run in a separate thread on one core while the other core can run native optimized code rather than interpreting foreign machine code. I just read this: https://en.wikipedia.org/wiki/Dynamic_recompilation. In section Gaming it mentions emulators which uses it, unfortunately it doesn't mention any snes emulator. This should probably be the main focus if we want to get significant improvements in playability, or what do you think?
It would also be nice to have in mind, if doing this, to maintain the same machine state and keep the original interpreter and make them changeable.
I did look to see if there were any snes emulator with dynamic recompilation, but couldn't find any. Admittedly I didn't look that hard, so it may still exist.

4. Internal-RAM/SRAM - I don't know the architecture well enough, but yes I would assume that we want as much as possible in the SRAM. When prioritizing things with lowest latency requirements goes there first. Things that can be allowed to be accessed with long latency should not be there. This seems like something that could be easier than the dynamic recompilation, but on the other hand if dynamic recompilation is the only way forward that should be main priority.

What is your opinion? Do you still think its possible to get this running enjoyably on the esp32?

I have some spare time at the moment, and I am interested in helping out

Also you may want to check the patches for the odroid go: https://github.com/OtherCrashOverride/e ... shOverride
My code doesn't require any of them, but other projects sometimes will depend on at least "Allow SD-SPI to share SPI bus.".

If you want to support two esp-idf version the first thing I would do is to isolate the sdkconfig settings that we actually need and put them in sdkconfig.defaults, leaving the rest up to the specific SDK.

I don't know the actual maximum FPS but we can overclock the SPI bus up to 50-60Mhz in my experience. But at the moment this isn't a limiting factor.
Simply for the lack of buttons I don't think the SNES would be very enjoyable on the GO, but I'm certainly interested in the challenge of getting the SNES to run on the ESP32/ESP32-S2 in general and the GO is an awesome platform to thinker!
Top

@sydarn2 I had some free time today so I've added CMake support. The project now compiles with esp-idf 4.0 however it doesn't boot (It works in 3.3.1).
Top

@ducalex Thanks, I also managed to build it but with some hassle.

This was a nice line, which I was struggling with finding a proper solution for, thanks

I also built your odroid-go-firmware-multi. Albeit I didn't test any of it.

I have been gaming some on the retroESP32 app which i also tried to build with the new idf hehe, but it is way more complex project so I stopped rather quick.

The bootloader and application can be compiled with different esp-idf versions and it is officially supported (probably because of OTA).

You can find more info on the boot sequence here although it doesn't talk about versions https://docs.espressif.com/projects/esp ... notes.html
Top
Post Reply
20 posts • Page 1 of 1