How to make a automated media server that downloads your movies, T.V. Shows, anime and cartoons. Tried and tested (and currently running) on ODROID XU4.

Lets start with the operating system.

Download and install DietPi to your device. (works on SD card or eMMC).
I recommend Etcher to install to SD card. So do the people who make the operating system.
If you are using eMMC make sure nothing else is plugged in.


Once it is installed use PuTTy or similar program to access the device.

It will run through the normal setup options.
==If it fails to connect do the following
==Type sudo nano /etc/apt/sources.list
==add a slash to the end of each source
==to save and close a nano file type ctrl+x
==reboot and it should work this time.

In the setup if you are running an XU4 I have found the first thing to do is go to config, performance options and change the following;
CPU Governor: Conservative
CPU Throttle: 85%
Max Freq: 1000MHz

(I found it overheats so I lowered it to that. Faster will still work but those are safe settings for a stock heat sync)

Click install and let it do everything. It will reboot once done.

I have attached several files in txt format for compatibility I'll explain them each:

A few helpful settings for people.

to help you find the most shows.


For those adding an SD card and/or an external hard drive. (I found that the USB 3.0 ports can be a little dirty and can be cleaned easily.

To add a drive type fdisk -l or blkid and then plug in your device. Then type the same command as before. Use the new information to add the drive.

Once added test with the command mount -a

If you get any errors please google it after checking you added the correct drive.

If all is well a reboot will have you ready to open each program to input settings.

I suggest this plugin to keep your deluge clean: http://forum.deluge-torrent.org/downloa ... f1ad1bc686

24/March/2017
-CouchPotato txt to include changes to snatching magnets.

The following will allow you to update automatically if you don't have much experience.

Instructions file has been updated to working tested version.

This is a simple edit to adjust the fan speed. I thought 65' was NOT an ok temperature. Very simple and quick edit that will allow you to keep your device cool with the default fan but it will make more sound as the fan will run more often.

I have changed my clock speed to 1,200 rather then the 1,000 previously mentioned and it stays safe.

you can use Emby server instead of Plex, since Emby can now to hardware transcoding

memeka wrote:you can use Emby server instead of Plex, since Emby can now to hardware transcoding

Emby uses Kodi. It would be good if you included instructions and if you plugged into a TV. I prefer Plex personally but people can offer opinion. I didn't use sickbeard or radar either. Plex vs Emby is like CouchPotato vs Radarr and Sonarr vs Sickbeard.

Please feel free to provide instructions (not a link but exact instructions for noobs) and I would love to hear the pro's vs cons. I nearly used it but knew plex from a few years back. Don't think this is sarcasm I believe that I haven't used it and therefor cannon say good or bad about it.

Well most of this in now obsolete. Oh well. Hopefully it helped a few people out.
Top

Your post was really helpful.
Can you please reupload the missing files?
We lost the attached files in our forum server accidentally.

No problem. I fell 100x better knowing it actually helped.

Great! Thank you for re-uploading.
Top

The NYAA index doesn't work on Sonarr any more. Here is a fix. 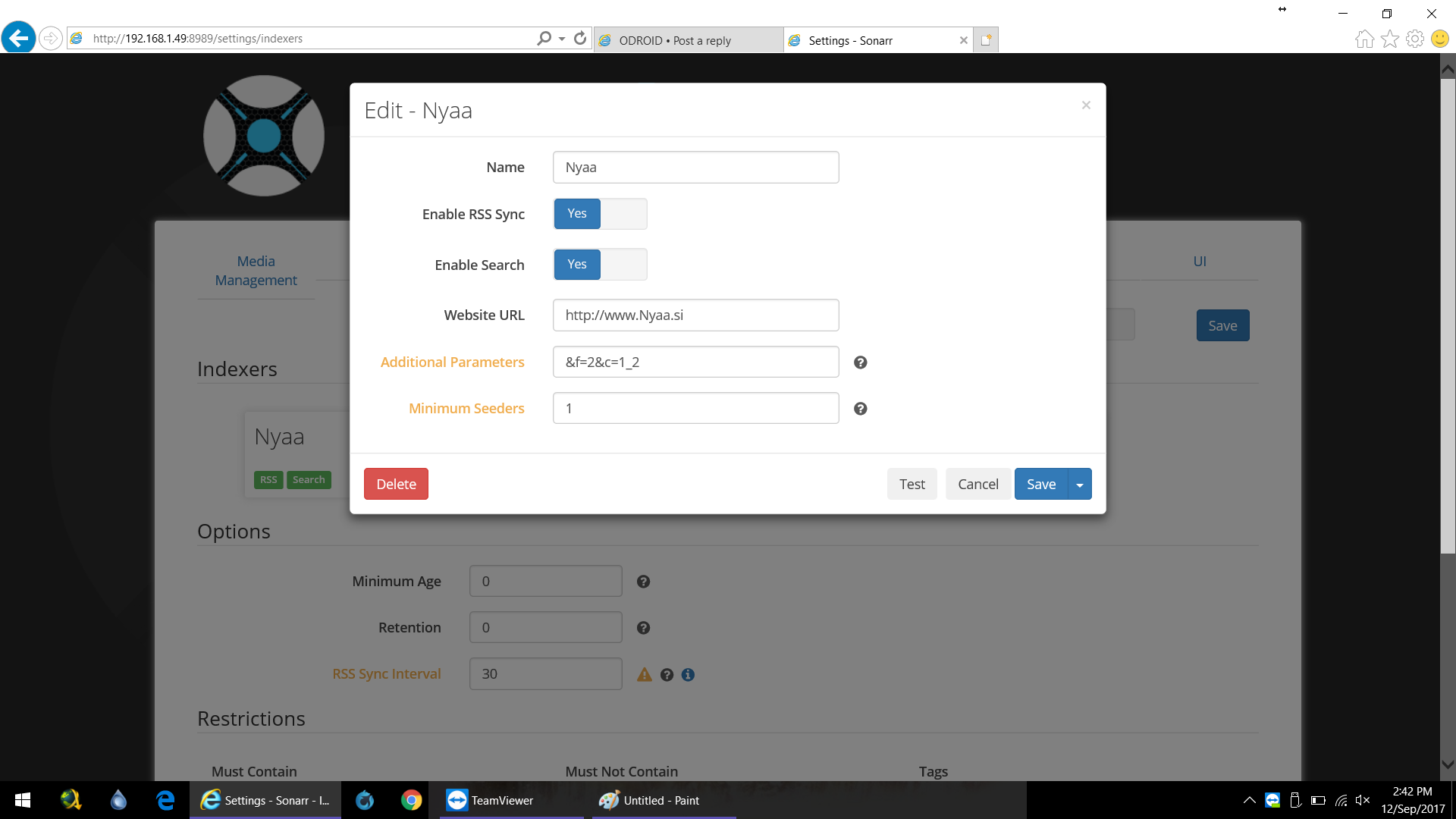 Some people are having issues with updating PiHole. Use this to fix it.

Remember most of this is obsolete due to dietpi adding the scripts to the auto install options. The fan is a new script and the Sonarr indexes might just be the same but it fixes nyaa.