After the HC1 has not been used for some time,
I turn HC1 on, try to login, and login... is... very... slow... and... all... commands... take... very... long...
After a short time everything is fine and fast again.
Shutdown and start again does not trigger this again, it appears to happen only after some time off.
This was not so from the initial installation, this "problem" only started "some time ago".

Today I made a crucial observation, see attached screenshot.
Something tries to really really write to the disk - which would explain the slowness.
At this point in time only the microSD card is mounted, but not the harddisk (it is encrypted, so I have to do that manually).
The screenshot was done a little bit too late, but 3 seconds earlier you do no see any process taking up CPU, but the CPU bars show half bars of red - and AFAIK red belongs to the system/kernel and not to some specific process - which would match the observed heavy disk writes.

I'll try to trigger it again and screenshot earlier, but we probably have to wait some time for that.

...what is happening here? Anybody seen something similar?

by fvolk
I think I found the cause:

...so the solution is to just delete that periodic auto-trim, Ubuntu's default is not good.

by odroid
I believe Trimming should be good to keep the continuous writing performance on any NAND-flash based storage.
But I also have a doubt in Ubuntu server rootfs needs periodic frequent trimming.

by fvolk
yep, it's fstrim that seems to be triggered ~once per week a few seconds after bootup.
CPU load is not much, but you can't do anything while it runs... 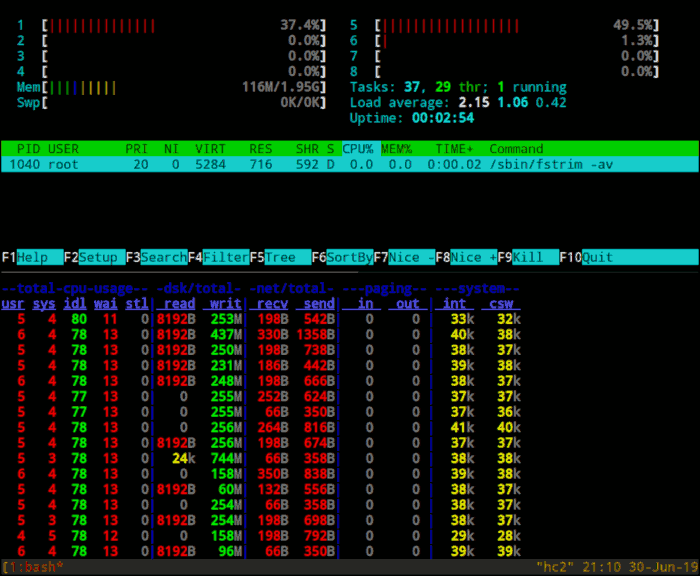