I've created an updated version of hominoid's XU4 openSCAD model. It is available on Thingiverse at https://www.thingiverse.com/thing:2655812

Hominoid's original XU4 model is from the 'XU4 Model for OpenSCAD' thread at viewtopic.php?f=97&t=26243.

Changes from the v1.1d origin include -
- Isolation of XU4 physical parameters into standalone parameters file to enable use in other openSCAD files (like a case design)
- Simplified coloring (ex: eliminated black since black doesn't show shading in rotation views)
- Addition of the transparency/opacity ability to the overall model and all model elements
- Added ability to show heatsink raised by a shim or perch
- Improved realism of heatsink fin quantity and sizing
- Added means to show SD card inserted into micro-SD connector
- Heatsinks now placed at their xy center to facilitate z-axis rotation
- Each component type now has separate module to facilitate future reuse on other boards
- Component elements are translated to origin best suitable for placement and rotation of that element type.
- Improved geometry mesh to minimize "ghosting" in openSCAD model view & rotation
- Replaced at least some hardcoded numbers with defined parameters for understandabilty
- Removed from the file the case-level accessories not specific to the XU4 model
- General openSCAD scripting structure
- Added various message outputs to the openSCAD console pane
- Extensive commenting
- Provision of a user guide

An example of a higher-level use of this XU4 model is the Configurable openSCAD Open-Frame XU4 Case at viewtopic.php?f=97&t=29066
Top

Very nice improvements!
I've just picked my favourite one from your gallery. 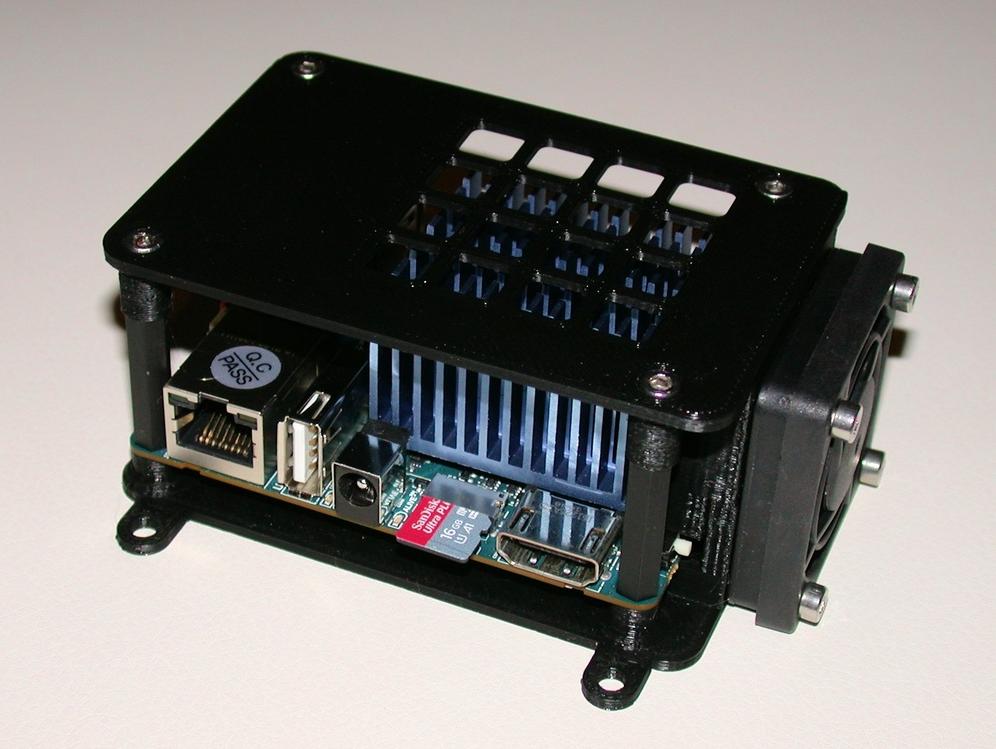 BTW, where did you buy the cooling fan?
Top

odroid wrote:Very nice improvements!
I've just picked my favourite one from your gallery.
[image deleted for brevity]
BTW, where did you buy the cooling fan?

Thanks for the feedback. That image is shown with the 7mm fan I happened to order with the XU4 from Ameridroid. https://ameridroid.com/products/fan-40x7mm-5vdc-quiet

I've added a finger guard to the fan. I believe it is a Qualtek QSG-40-02 that I had previously ordered from Digikey as part of one of several 3d printer upgrades I've went through.
Top

Thank you for the answer.

Users browsing this forum: No registered users and 8 guests