I've checked with the same image(Custom Debian Image) and WD Red 2TB HDD on my HC2.
I can't hear "clack" sound when its power down and no more increase attribute 192 "Power-Off_Retract_Count" after I installed the script.
https://wiki.odroid.com/odroid-xu4/trou ... own_script
But, I'm not sure the meaning of 192 attribute of S.M.A.R.T of your old Toshiba HDD. Because its attribute has a little different meaning basis on the manufacturer.

Which OS image and kernel version do you run with OMV?
What messages appeared when you ran the script?
Top

ARMBIAN 5.85 stable Debian GNU/Linux 9 (stretch) 4.14.111-odroidxu4. I don't run the script to shutdown manually, I've installed it like the wiki showed. I have another HC2 with a 4TB running the new Ubuntu Release and its working fine.
Top

We've not used Armbian image and it is hard to know what's wrong.
Can you switch to our Ubuntu image to narrow down root causes?
If it is an Armbian specific issue, post an issue on the Armbian forum.
Top

So its possible that its not compatible with the OpenMediaVault image here? - https://wiki.odroid.com/odroid-xu4/os_i ... hird_party. That's what its currently running. The other HC2 is running Ubuntu 20.04.1 LTS (GNU/Linux 5.4.58-211 armv7l) from that same link and it appears to be working ok, although it has a different hard disk in it.
Top

Did you follow this recent instruction to install OMV on your HC2?
https://github.com/OpenMediaVault-Plugi ... rmbian.pdf

We used an HC1/HC2 specific old OMV image a couple of years ago.
https://wiki.odroid.com/odroid-xu4/soft ... stallation
Top

Mine would resemble option B. This odroid has been running since 2018. I've just upgraded from a 4TB to a 14TB drive. OS is still the original install though.
Top

Do you mean your new 14TB HDD's parking works fine on Ubuntu 20.04.1 while the latest Armbian doesn't?
Top

Yes. I was running the other one but @FanDjango's also isn't working for me. Is there anything in the OpenMediaVault dashboard I should look at?
Top

I have the HC1. The hard disk clacking sound started when I moved 'root' to the sata drive. the included and original fix did not work. I didnt download the alternate fix but borrowed the -Y vs -y paramaters to hdparm and got this working for me. I had this issue whether using odroid/hardkernel images or armbian, when 'root' was on the sata drive

details of my system

The original odroid.shutdown script generated this error, which was captured via serial port 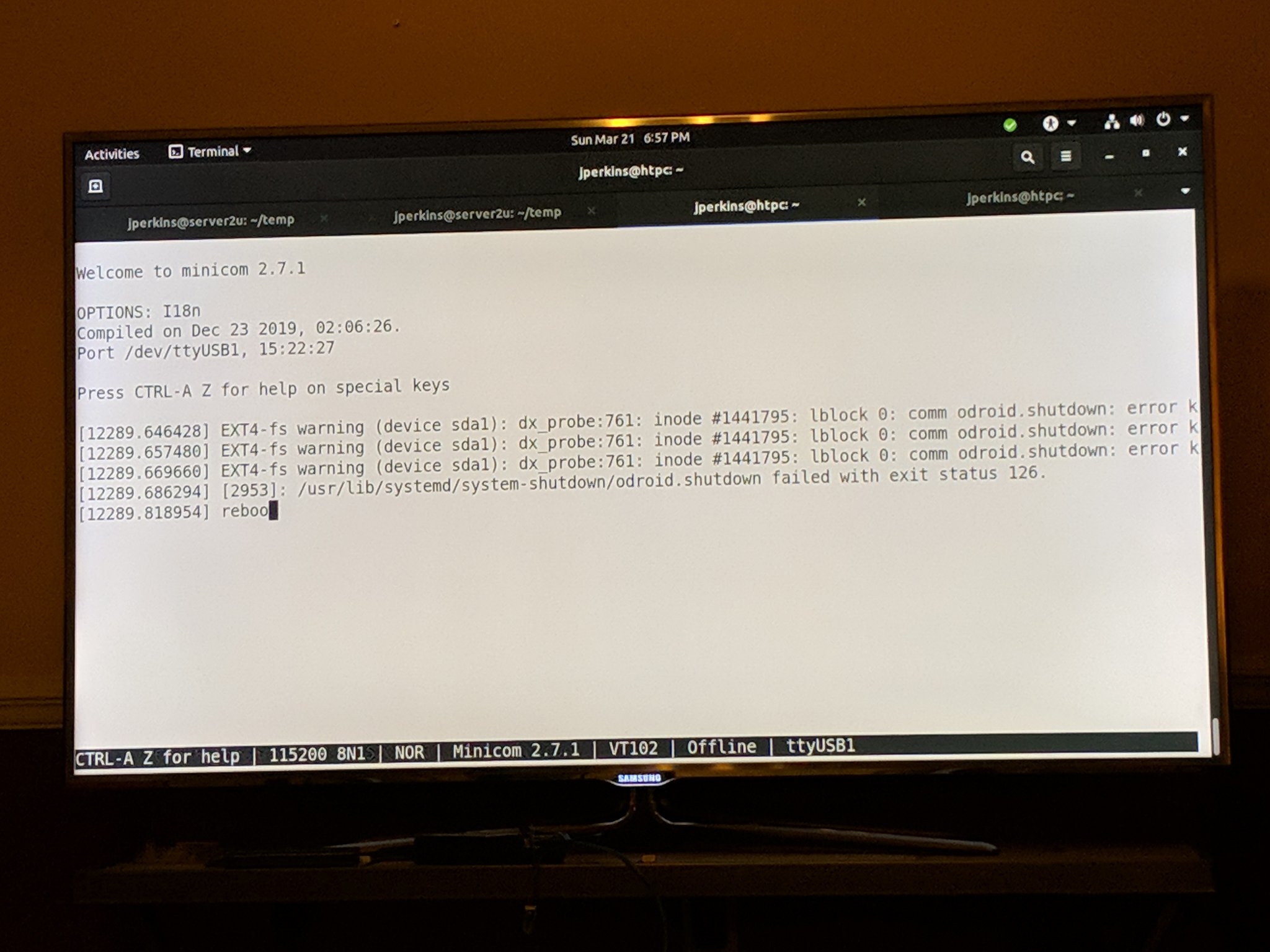 the inode referenced traced back to /usr/bin
the exit code 126 means 'Command invoked cannot execute'. https://tldp.org/LDP/abs/html/exitcodes.html
I did not troubleshoot any further

note I do not use mdadm and only have one sata drive connected to my HC1. Currently this is working with LVM and LUKS. Also running a swap file on the sata drive. disabled the zram and zlog armbian utilities.

On a unrelated note I never could get zfs to work on this system when zfs was 'UNDER LOAD'. it would hang on multi GB writes or zfs send/receives on a 1gb network. tested zfs on many hardkernel/armbian/ubuntu/debian/kernel/zfs_version/ with_uas_or_without configurations. YMMV
Last edited by jperkins on Mon Mar 22, 2021 5:22 pm, edited 1 time in total.

Thank you for sharing a nice tip about the additional sleep delays.
The parking characteristics of the Seagate ST5000LM000-2AN170 seems to be different from our tested WD or Toshiba HDDs.
Top

Still the same issue here too.

I applied the given script and installed it.
The HDD spins down on shutdown - just to restart again and than 'KLACK' resulting in rising Power-Off_Retract_Count value in SMART.


Tried to set second 'Wait' variable for sleep after hdparm command to 10 which seems to work for this device (also the HDD still stops/restarts/stops/restarts when shutting down but no self-destruct sound and no PORC rising anymore).

EDIT I:
Cheered too soon, issue persists irregulary with Hitachi 5K500.250B. Very annoying!
The disk is parked on shutdown and stops spinning - just to spin up again and make this self-destruct-sound before finally poweroff.
Tested with mainline linux-armv7 5.11.2-1 kernel and linux-odroid-xu3 4.14.180-3
Is there really still no working solution on this issue?!

EDIT II:
The issue seems to depend on the hard disk used:
With an old WD3200BEKT (WD Black) the disk does not spin up short bevor poweroff and does not make this loud klick noise using the script.

Perhaps there should be a compatibility list for devices known to work well with this device!
Top

on a Western Digital Red 4TB (WD40EFZX) I had the issue that it sometimes it worked fine but sometimes not and resulting in raising the retract value. I have tried various delays and it works with Wait=0 in my case.

Try on your own and see if it helps.