It uses Kernel 5.19.10 at the moment, but will get updates as usual from my repository.

It's a headless server image only with user root. But it has all my repositories included, which allows for easy installation and updates of packages such as Kernel and Headers and other packages.

The image has my usual setup: means on first boot it's resizing the rootfs partition and configures SSH. It will automatically reboot after the initial setup after which this image is ready to use.
Kernel and headers are already installed if you need to build your own drivers.
A few basic tools such as htop, mc, vim and bash-completion are already installed for your convenience.

It's ready to be used as a server image.

Features: First things first:
Since there's constantly new development for this image and ODROIDs in general the First thing you should do after the image is up and running is to install all updates: 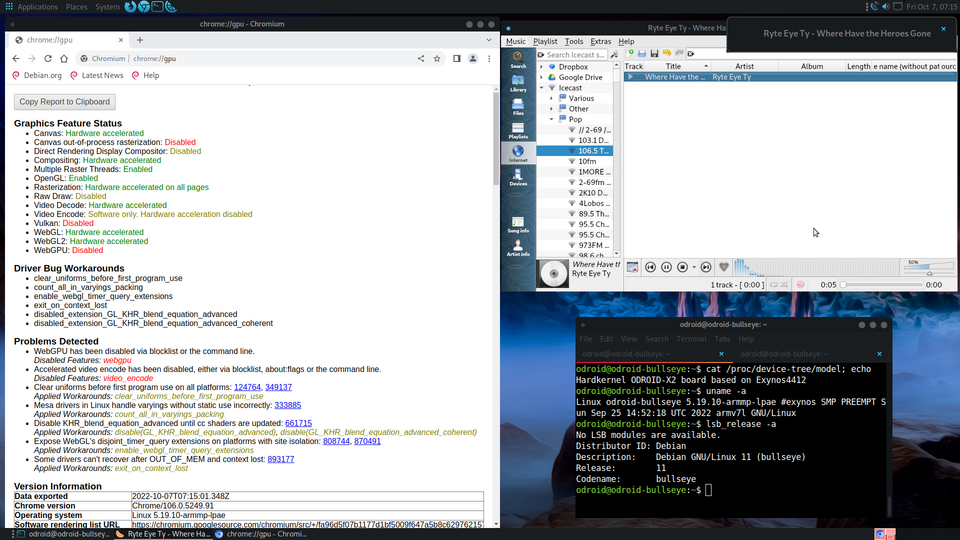 Which should easily allow you to install a Desktop Environment. 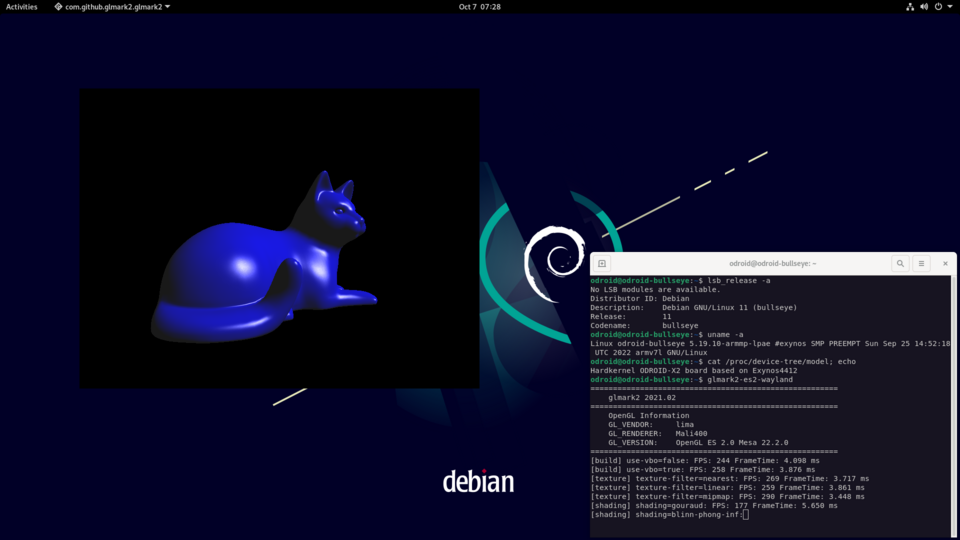 Hints:
Changing language:
If you install a Desktop environment you should already have keybord-configuration installed, it will ask upon the first installation what keyboard layout it should use.
This configuration is for your X11 Desktop so you have your desired keyboard layout.
For console you need to install console-setup to do the same, so just in case:

should be all that is needed to change your keyboard layout.
You probably want to set timezone as well

If you're using a "hidden" network, please also add wpa-scan-ssid 1

Webbrowser:
Chromium and Firefox work fine, Chromium can be started with --use-gl=egl flag to run with WebGL hardware acceleration.
Although WebGL is supported, the Mali 400 GPU is very limited and results are not that great.
It works fine for hardware accelerated browsing (smoother scrolling of web-pages) but WebGL applications like WebGL Aquarium (although working) are very slow.
Same goes for YouTube, the performance is very bad and I would suggest using external player (for example mpv) to run YouTube videos.

Video Playback
While Kodi can be installed and runs both from X11 desktop as well as directly from terminal (GBM). It does not support hardware accelerated video playback.
If you install a desktop via setup-odroid I opted for installing mpv as a video player. It currently does not support hardware acceleration, but the CPU is fast enough to support 720p or even 1080p H264 content software decoded.
Maybe in future hardware accelerated video decoding will work again as it technically is included in the Kernel and applications, but currently doesn't work.

Known Issues:
Exynos 4 boards are by now quite old an lack some of the features modern OS expect from GPUs and CPUs, therefore your experience is somewhat limited.

Wayland:
Wayland runs ok, I'm not a big fan, but if you want to use it that's fine.
Please be aware, MOST Linux application are still written for X11 and Wayland uses XWalyand to run X11 applications on Wayland.
This will also cause a huge performance hit, as the Wayland Desktop runs completely on the GPU and running an XWayland server within Wayland therefor runs with reduced overall GPU performance.
So while Gnome itself may run fine, and the few Wayland capable application out there also run ok, some application that are written for X11, may run worse under Wayland than when using an X11 Desktop instead.

No Output on TV or Monitor:
While the ODROID U3 seems to work out of the box, I had some issues with my ODROID X2, where it would not output anything on the TV.
Apparently the EDID is not always working on the X2. A workaround for this is to use the config.ini on the bootfs to configure a fixed screen resolution.
I had best experience with videoconfig="drm.edid_firmware=edid/1920x1080.bin"

Please Note: the image requires a newer version of u-boot!
This means while you can flash the image on an SD card and it will work out of the box, for eMMC the image only works if you perform an eMMC recovery process that flashes the newer u-boot from Debian repository.
I haven't tested this yet, so I suggest using SD card for the meantime.

As usual feedback is welcome.

Donate to support my work on the ODROID GameStation Turbo Image for U2/U3 XU3/XU4 X2 X C1 as well as many other releases.
Check out the Games and Emulators section to find some of my work or check the files in my repository to find the software i build for ODROIDs.
If you want to add my repository to your image read my HOWTO integrate my repo into your image.
Top
Post Reply
1 post • Page 1 of 1

Return to “Other OS”