SBC Case Builder 2.0
Version 2.0 release of SBC Case Builder includes significant improvements including new cases and SBC, variable height standoffs, multi-associative parametric accessory positioning and a graphical user interface that allows for the dynamic adjustment of any of the case attributes. New base cases include snap, fitted, round and hex, and work with the 47 SBC represented by 43 models, from 8 manufactures, in the latest version of SBC Model Framework.

New cases can be created and saved, as well as existing cases modified using any case parameter, adjustable from the GUI. This makes the workflow quick and simple with virtually no learning curve and no need to know OpenSCAD. Simply turn on the Customizer located in the OpenSCAD view or window menu and arrange your windows as you see fit. With the new graphical interface, parametric positioning of accessory and the other improvements, SBC Case Builder has reached a new level of functionality, usability, and productivity. Check out the 60 second custom case in the updated op.

When my H3+ arrived the other day I knew it had a different heatsink, so I wasn’t surprised to see that the heatsink was slightly larger. For the lowboy and lowboy_router cases, the heatsink protrudes thru the top so they needed to be modified for the H3. 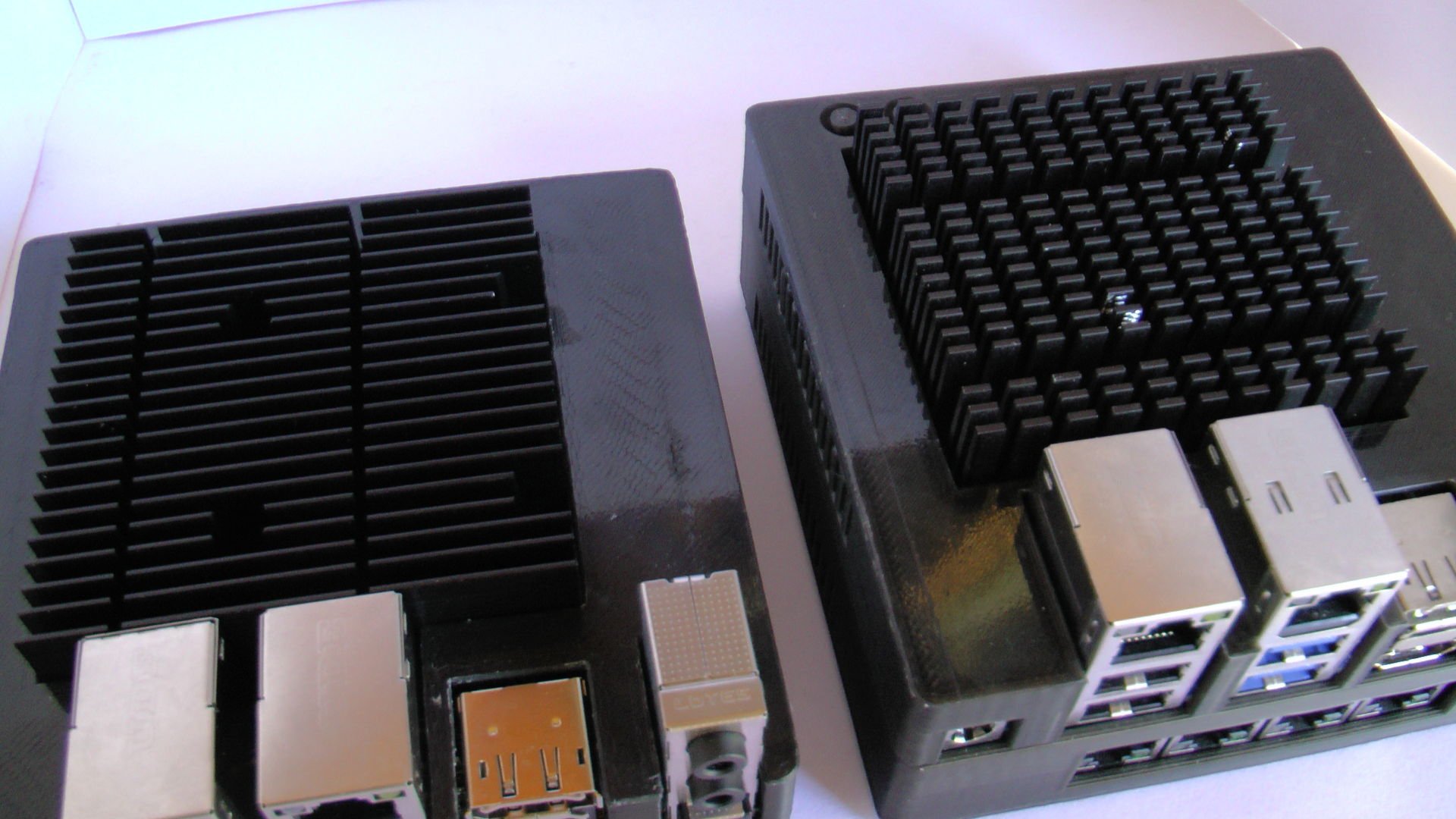 A H3 model with it’s new heatsink was added to SBC Model Framework v1.0.9 and is included in this update with separate case entries. Also, the bottom height was increased by 3mm for all H2 and H3 cases that use the bottom accessory access port. There were other minor changes to the alignment of the access cover tab, opening and nut holder when used in landscape mode.

That's very fortunate you looked into this so soon, I already started playing with Case Builder, trusting the H2 model would be perfectly compatible.

Punk ain't no religious cult, punk means thinking for yourself!

All the external facing I/O is the same but there are some other internal PCB components that are different or rearranged slightly, for example the fan connector. I need to check the eMMC as well, it may have been moved.
Top 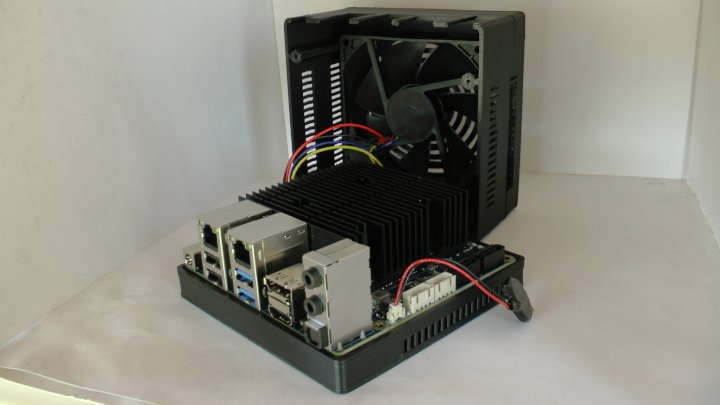 These are available now on the main branch at https://github.com/hominoids/SBC_Case_Builder and will be included in the next release.

This is my lowboy setup I’m running with a Noctua NF-A8. It’s the smallest H3 case available and can be run vertical too. The 80mm fan is a good fit for a direct heatsink mount and the new heatsink easily accepts the Noctua isolation mounts. I’m running a nvme drive so we’ll see how the bottom temperatures are over the long run. Plan B: Vents can be added to the access port cover if necessary. Plan C: raise bottom height and use a 40mm fan in the bottom. It will also be getting some rubber feet and maybe a vertical stand. 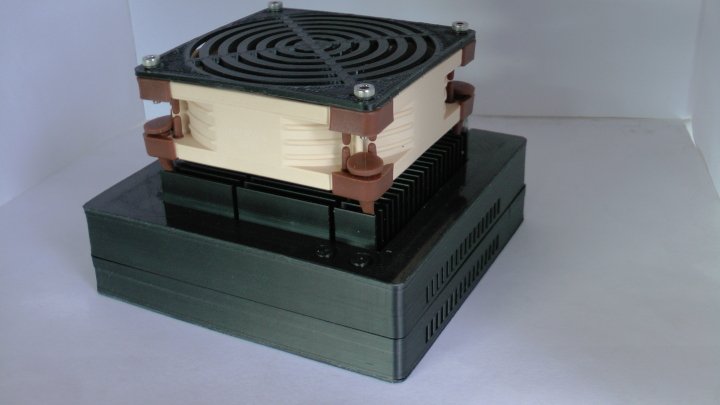 Damn you hominoid! Now I want a 3D printer! Beautiful work as always.....

In case you didn't see them, outside of SBC Case Builder there also are vuScape8m and Cloudshell4 Unauthorized M1 Series cases that might interest you.

After much to do with my printer, software bugs and other uninteresting things, I have finally finished adding the odroid-n2l and odroid-n2lq into SBC Case Builder with the following cases predefined: 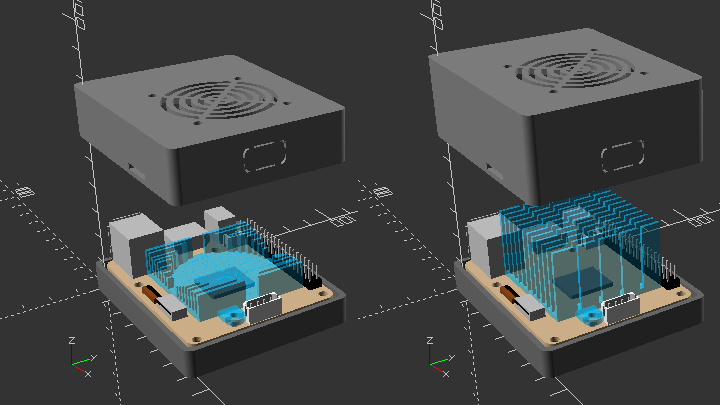 Small compact boards can pose some clearance challenges and such was the case. Some component locations currently don’t allow the use of sidewall supports for the N2l so they have been turned off for the predefined cases. They can be used if 2 of them are manually trimmed to allow for component clearance. For the tray cases, one of the nut holder interferes with the eMMC opening but is still usable. Possible solutions are to make the case slightly wider, glue a nut to the side wall or just use 3 screws for the top. The n2l_shell case works well with no known issues.

There is now a new view mode called Part which allows for Individual part generation of the active case. An additional pickbox allows for specific part selection. This release has the H3 tall boy cases included as well. Due to a past update in the standoff() module all case standoffs have been reduced in diameter to accommodate the change.

There appears to be a software bug for OpenSCAD releases greater then 2019.5 which is exhibited in preview for all Tray design cases with a fan opening. It does not happen when the Tray cases are rendered, only previewed so it doesn’t interfere with producing stl’s. The problem is with the bottom case piece even though it looks like it effects the top piece. If the fan feature is turn off or changed to one of the other selections there is no issue. The strange thing is that there are no issues with any other case design, even though they all use the same fan mask.

Since it’s only in preview it shouldn’t be a problem but if you want to change to a different version there are appimages of all the OpenSCAD releases at their website to supplement what ever version your package manager is providing. I had been running Ubuntu which provides OpenSCAD version 2019.05, but recently switched to Manjaro which packages OpenSCAD 2021.1.

Like I said, 2019.5 works flawlessly and the newer versions only exhibit this problem for tray cases with a fan opening and then, only in preview. I’ll spend some more time checking my code before submitting a bug report but right now I don’t see any problems so there is no reason to holdup this release any longer.

Files and documentation updated to version 2.0.3 in op.