The problem I am having is that the Odroid just outputs to the ultrastretch display in HD 1080p.
I tried it with a custombuild and edited the env.ini accordingly (compare viewtopic.php?t=30538 and https://wiki.odroid.com/odroid-c2/appli ... utosetting). Afterwards I got the following image just covering half of the screen:

After a few seconds it switched to full width but got stretched again (looked like 1080p again):

I also observed that CEC was disabled and I was not able to change anything here:

Thanks a lot and best regards,
Flo
Top

Does someone has a hint for me how to get this running?
Top

If it works fine, we will try merging the modeline configuration into Android HDMI driver.
Top 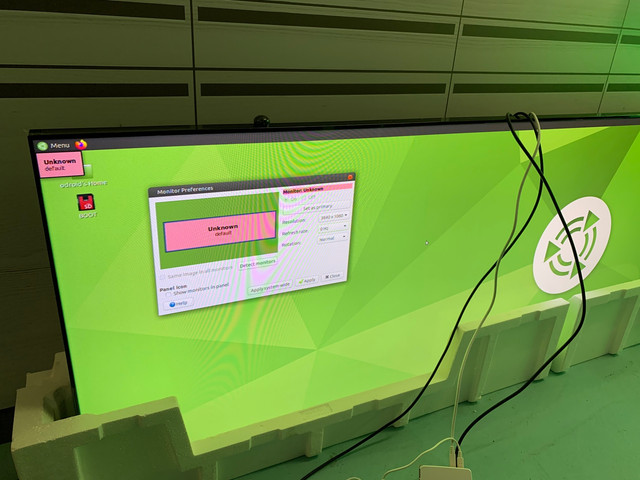 What would be the next steps to get it running for Android as well? For our project it would be very good to have a working version by this week.
Can I support you somehow?

Android display composer(surface flinger) has a limitation up to 2560x1080 resolution. Therefore, we have to resize and scale fb as 32:9 aspect ratio.
The rendering surface area must be resized to 1920x540 for your monitor even the HDMI PHY is running at 3840x1080.
If you want to try that 1920x540 resolution, I will make a trial OS image.
Top

I'd expect thar going down with the rendering surface to 1920x540 resolution, would not allow me to play 4K videos, right?
Top

I believe the video rendering layer will be 3840x1080 while the Android GUI surface layer is 1920x540.
The GUI layer will be upscaled and mixed with the video layer to 3840x1080 HDMI PHY resolution.
@codewalker is building a trial image and you can test it soon.

Try to install this.

Thanks...I tried the new image but this was also not working.

But when I was changing the modeline to the following, it was working:

Now the Android display is not of high resolution but the videos which we are playing from our app show in 4K. So this is working fine.

Though these modeline values were not officially returned from the display via xrandr but the numbers more of a guess by myself.
Somehow Android does not recognize the display.
As mentioned before the Emteria Android OS was recognizing it automatically and it i running Android 11. Maybe this hint helps.

Anymore hints how to follow this up and have a clean version where I do not need to set the modeline manually?

Thanks for your great support
Top

It is not an Android OS version issue.
Currently, we've supported the following resolutions only.

We can add your display resolution into the list for auto-detection feature once you provide an EDID file.
Run this command to capture your monitor raw information on Ubuntu OS and post a reply with the EDID file.
cat /sys/class/amhdmitx/amhdmitx0/rawedid > /media/boot/3840x1080-edid.bin
Top

Thanks for your quick support.

I tested the new image but still I get the stretched 1920x1080 resolution by default.
Even if I use your provided modeline it is not picking up.

Just with this modeline it is working

Thanks for your support. I am sure we get this running smoothly

Thank you for the EDID file.
We will look into the auto detection issue again in the next week since here Korea is already Friday evening.
Have a nice weekend.

Edit.
BTW, what happens if you manually edit configuration file like this?

Do you show me the full u-boot and kernel log?
Top

I've uploaded the test version that fixed some reg values.

Sorry for the late feedback. Thanks a lot for the new version. I am no vacations until 23.8.
I'll test it once I am back.

We plan to use the N2+ model in the future. Will we expect the same issue over there?

N2+ Android also doesn't support 3840x1080 out of the box at this moment.
Once you confirm the latest C4 trial image, we will push the patch into the next N2/C4 Android updates.
Top

If you want to test it on N2+, I will make a test version today.
Top

Thanks...would be great if you could prepare me a test version for the N2+
I'll be back in 1.5 weeks for further testing. Sorry, I am on holidays

Sorry for getting back so late, I was on vacations.
So I tested the N2 version but it is still not working. Seems that it is not picking it up automatically.
If I set it manually, it is working.
Any more hints?

Hello everyone,
after a longer break we are back at this problem. Sorry for not getting back earlier. Today we did a lot of tests but it is still not working (same problems as before). Somehow the resolution is not scaling up to 4k if videos are running.
We are also not able to download the images you provided.
Could you provide us an image for the n2 to test and give a hint which modline we should use? That would be fantastic.
Thanks a lot and best regards
Top

Do you try to install lasted android image?
I've included some patches for 3840x1080p50hz for latest version.
Top

Which modline should I use to get it running because it was not working out-of-the-box with this image.

Made another test with the latest image (compare post before) and the modline:

But it did not work. Let me post you the sequence of the startup:

1. For the hardkernel logo everything looks great. Also the TV shows the correct resolution and frequency. 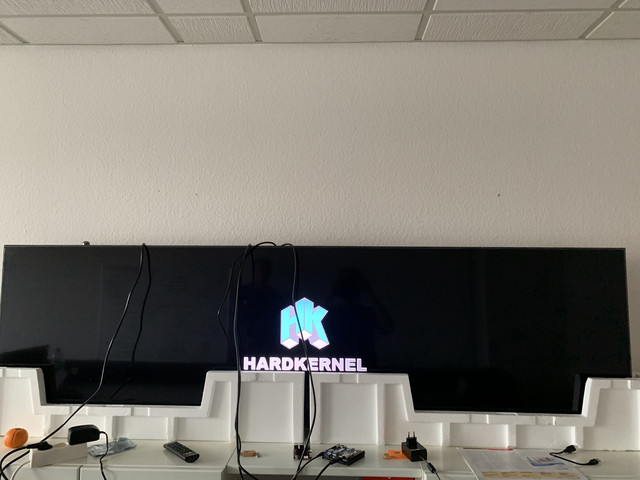 2. Once the android logo is showing, it is shrinking too half the width 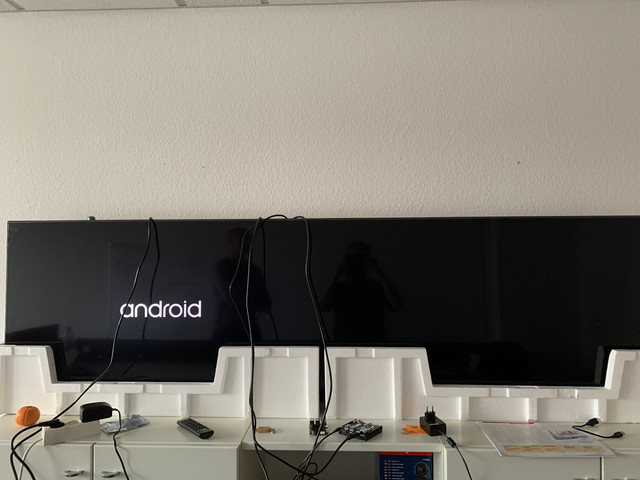 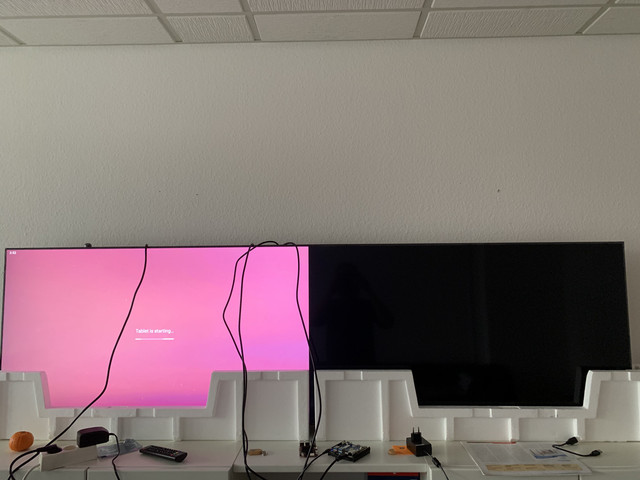 3. After a few seeconds it is stretched to the full width. But the sizes do not fit anymore (I think he uses 1920x1080 but the height is just 540 for this screen) 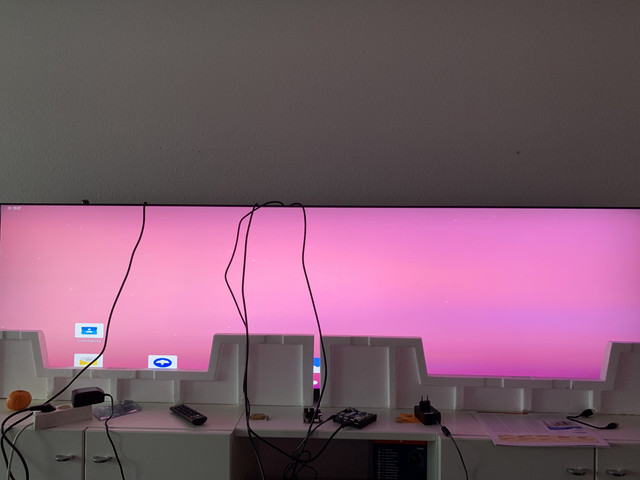 Do you have an idea what the issue could be here?
Thanks
Top

Thanks...I tried it but just the hardkernel logo was shown. Afterwards, nothing is shown (no signal).
Any more hints?
Top

Do you share your full kernel logo?
And Show me the results for this command.

Sure...what's the best way to retrieve the kernel logs? Thanks
Top

here is the result of the commands:

And I attached the complete system log which I got from connecting via adb
https://easyupload.io/0tdlmx

If you need more information, let me know.

Thanks for your support
Top

We need the kernel log.
Try to this command.

Could you try this one, please: https://ufile.io/u91lkek6
Top

Show your env.ini and boot.ini.
Do you try to set display_autodetect="true" ?

Thanks. No autoconnect was on false.

I did it with true and saw a different image: 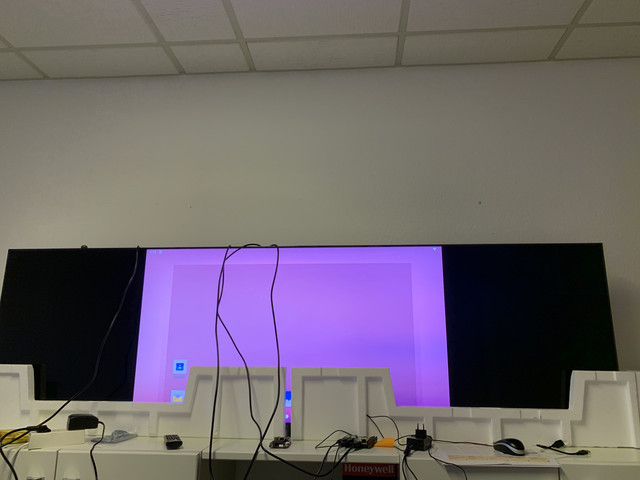 But the app is not scaling up for a video playing in the format:

I need the u-boot log too. Do you have a USB-UART debug kit?

1. Install lastest image without edting anything.

Thanks...I tried both things:
1. Operating system was starting up but looks like in my previous post
2. It is not starting up and I get no signal

Can you provide a guideline (or link) how to get the u-boot logs?

Thanks a lot and best regards
Top

You need the USB-UART Module Kit for Kernel and U-boot log.

Even if the display is working well. UI resolution is not 4K. Are you aware of this fact?