The Other Post Is Nothing But People Complaining About Them Messing Up Copying Files Over. Please Post Issues And Help Here. If Your Having Issues With Copying Roms Keep It In The Other Room.

A Real Issue. My Batocera Build Somehow Unlinked My Share Partition While Booting I Can Access Everything Still But When Booting It Completely Ignores The Other Partition It Even Shows "NA" Under Storage Information. Another User Mention It Is Likely Writing To RAM And Wiping Each Boot. How Can I Relink The Second Partition. I Imagine Its Just Code In Boot File. Batocera Is Much Different Then Raspberry Pi Or Kubuntu Which I Primarily Use For My Linux Purposes.

If This Post Is Wrong Place Please Move Over Or Hey Even Delete The Whole Thing But People With Issues Should Have A Place To Check Instead Of Reading 3000 Posts About People Copying Roms Incorrectly Because They Are Using 3rd Party Software Instead Of A Linux Environment That Can Be Booted Easily On A Second Partition Of Their PC Or Off A USB Stick Running Live CD. File Explorers Can Run As Root And Simple Copy And Paste In A Live CD Linux OS. Alright NO MORE Of That Here Go To Other batocera.linux Post For Copying Files Issues Please I Beg.

Some Users Like Reading The Posts For Updates And Issues But That Is ALL About Copying Roms And Complaining So Please Help Eachother Here.
Top

hardknoxni69a wrote: ↑
Tue Mar 03, 2020 7:38 am
A Real Issue. My Batocera Build Somehow Unlinked My Share Partition While Booting I Can Access Everything Still But When Booting It Completely Ignores The Other Partition It Even Shows "NA" Under Storage Information. Another User Mention It Is Likely Writing To RAM And Wiping Each Boot. How Can I Relink The Second Partition. I Imagine Its Just Code In Boot File. Batocera Is Much Different Then Raspberry Pi Or Kubuntu Which I Primarily Use For My Linux Purposes.

If you log into your unit in ssh and type

does it list all partitions? I'll check the partition structure when I get home but I think the share partition shown in Samba is just a specific share folder set up for the roms folder, which should be part of the main / partition (Usually /dev/mmcblkp02)

I haven't seen the issue where the partition would be 'de-linked' since that's not how that's supposed to work, but I'll have to see what I can determine when I get home and can take a closer look at it unless someone beats me to it.
Top

^^^ This, but the partition should show as /dev/mmcblk0p1 for batocera (boot) and /dev/mmcblk0p2 for share (roms)
Top 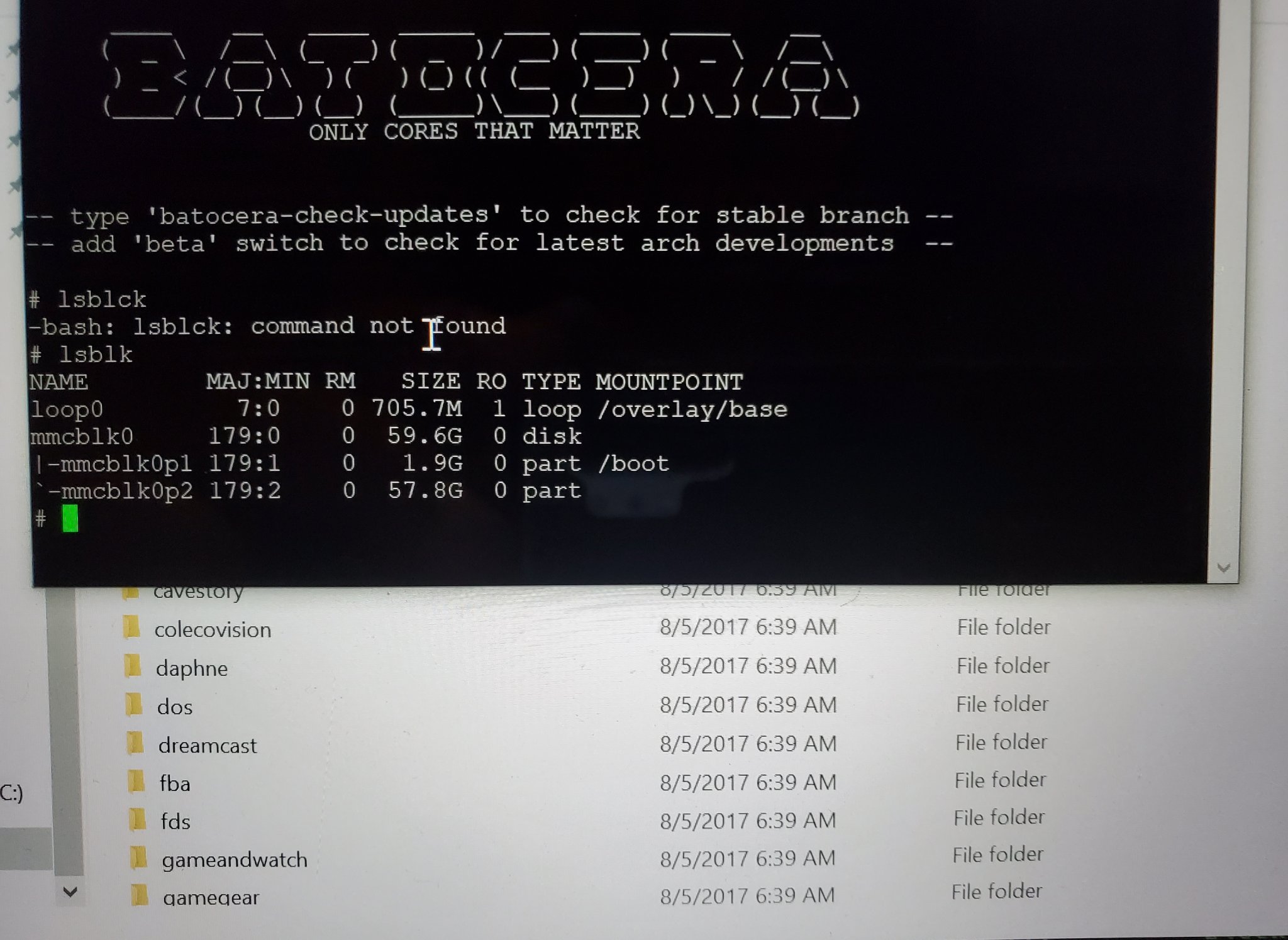 So initially i thought it was caused by some issue during the update but put of frustration and it being almost bed time i just reflashed the whole sd and recopied over all my roms yes it was a long and tedious process but nonetheless it booted up and everything worked great then i went to play a game and realized my saves were not loading so i shut off and copied them back to the device and loaded up and once again my system isnt seeing the second partition. Now the weird thing is when the device is on connected to wifi it still loads the samba share i can see everything through the network when i run lsblk i can see the see the second partition mmcblk0p1 is 1.9G and mmcblk0p2 is 57.8. So there is a tmpfs as well which is like u said i tried mounting but couldnt i imagine i need to mount 0p2 as /userdata. Unfortunately i could not get to work correctly so any help is appreciated. Even if i get it to mount once i restart wont it disappear again unless i change the boot info? Im not exactly full of knowledge when it comes to linux OS but definitely can get around and use with a little guidance so all help is appreciated
Top 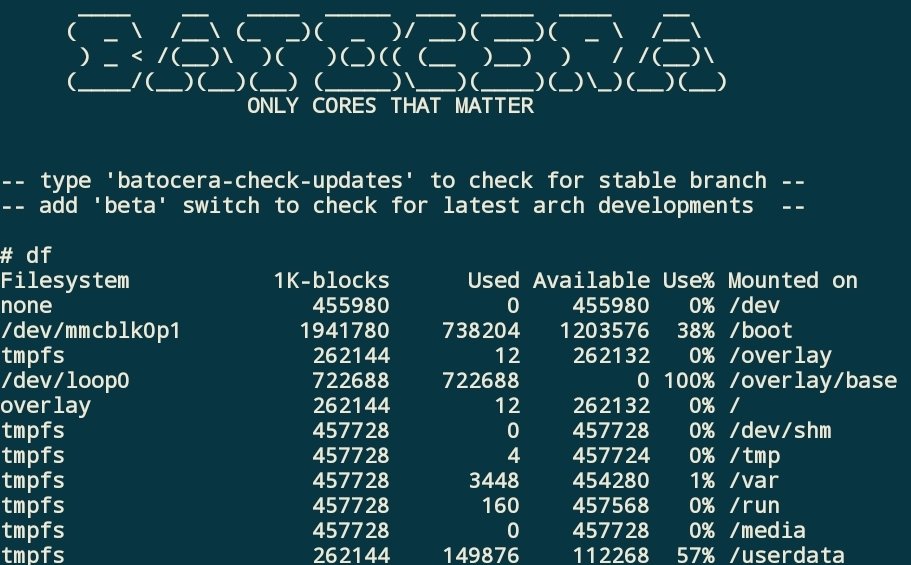 Curious how your system is displayed. I really dont want to do the whole process all over again for a third time just for the issue to happen again when it seems like a very simple fix. All help is appreciated.THANKS!
Top

this is what you should see: 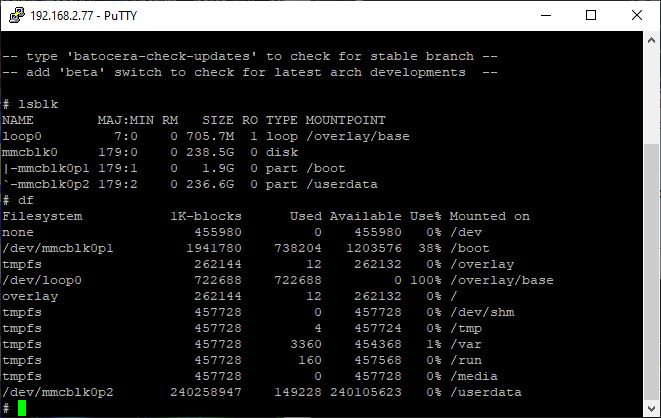 Ok so the million dollar question. Will it stay after afterward. So i need to
Umount -f /userdata
Mkdir /userdata
Mount /dev/mmcblk0p2 /userdata

I am not very good with linux but can usually get by. I imagine it will say userdata is in use so will not let me unmount. Should i just use the force unmount or do -l(L) as well as it supposedly cleans up.
Top

I would say try -l first and then -f if that doesn't get the job done.

-l doesn't clean anything up, it just waits until all operations on that mount complete before dismounting it. Problem is, if emulationstation holds it open, -l may never dismount it so you may have to use -f or at least kill the ES process. I wouldn't worry either way tho, since what your unmounting is a tmpfs. You don't really want it and I don't think you could break it if you tried since it's built from the protected OS.
Top

Also, you may want to check the contents of /etc/mtab (from ssh: nano /etc/mtab)which should look like this (note the reference to the second partition mounting as /userdata on the last line):

Yeah, the /dev/mmcblk0p2 is the partition I was looking for. That's weird, it seemed like some how the mounting for that partition just up and disappeared and I can't think what you might have changed that would cause that. But if you've reflashed and it works now, moot I guess? I didn't get the chance last night to fiddle with anything, had a busy night doing other things. Was this the new Beta image or the initial image that was posted?
Top

Thanks for the assistance. Well initially it happened so I came to seee what everyone thought out of frustration I ended up just starting fresh. Then it happened again so thats where the pictures came from. Then out of nowhere before you replied it randomly started working again. All my fsck came back good so I do not know what caused it both times and did not have an opportunity to apply the fixes before it randomly started working again. I hope i do not need to use them but atleast i have an idea of what needs to be done now. It was the latest 0301 build so perhaps it has to do with that particular build. I will look up the command to kill es so I am prepared and ready with a solution. I imagine my mstab file was correct because it started working again. Just something randomly caused my p2 to not be recognized by the OGA. Just strange because both windows and linux loaded both partitions no issues. Either way it currently is working. Thanks to you kind folks i have a solution ready just in case it happens again so thanks alot.
Top

so I'm pretty sure I have a "real" issue to post, despite it being slightly related to roms.

I bought a 256GB class 10 A2 V30 IU3 TF card to use with my OGOA, and installed batocera. it booted, expanded the SHARE partition, and so i shut the device off, installed the extfs drivers from paragon, and loaded the partition with roms successfully.

The first problem I noticed is that it wasn't saving my emulator or UI settings over a reboot. I figured it might just be by design, so I put the TF card into an SD reader on my mac, and edited /Volumes/SHARE/system/batocera.conf directly.

this led to the second problem: I cleanly ejected the TF card, then put it back in the device, and booted. the device came up, but completely factory reset, and none of my roms. I turned on wifi, SSH'd in, and discovered that the SHARE partition never mounted. so I did an `fsck -y` to fix, and after thousands of lines of output, it aborted. i troubleshot that issue, and discovered that I was hitting an Out-of-memory error on the device when running fsck on such a large filesystem. I was able to get around this by using the USB port to mount a 32GB USB flash drive as swapspace, which allowed fsck to complete. I rebooted, and the device came up correctly, with all of my roms.

problem #3, is that the settings I changed in batocera.conf are not being loaded, and I t still won't persist settings over a reboot. I looked into it more, and found that my overlay doesn't exist _at_all. so I changed a setting in the UI, then SSH'd in and ran `batocera-save-overlay` manually. it crashed. I restarted the device, ssh'd in, mounted the 32GB swap device this time, and ran `batocera-save-overlay` again. again, the device just froze after about an hour or more of waiting for mk2fs to complete.

problem #4, While trying to solve #3, I noticed that there was a minor version bump available, so I decided to try to update. I used the UI, and it progressed through to 'extracting packages', but after 12h of sitting at that screen, I grew tired of waiting, and rebooted the device. It was in a bad state, so I tried the manual method - I put the TF card back in my computer, deleted the contents of the BATOCERA drive, and replaced with the downloaded contents of the latest boot.tar.gz

problem #5, i put the TF card back in the device, and it no longer boots past the batocera splash screen. and since wifi won't come up, I can't ssh into it. I've left the device on and powered by usb overnight, and it never got past the splash screen. (the colorful one with the japanese chars in the lower left corner.)

Currently, I'm in the process of backing up the SHARE partition so I can wipe the TF and start again. But I'm pretty sure I'll get burned by the OOM errors again when I do, because the TF card is so large. Do any of you have experience with the overlay script failing, because that seems like something I can't easily solve either?
Top

I bought a 256GB class 10 A2 V30 IU3 TF card to use with my OGOA, and installed batocera. it booted, expanded the SHARE partition, and so i shut the device off, installed the extfs drivers from paragon, and loaded the partition with roms successfully.

The only "real" issue is the use of Parargon software, all of those issues you are having are because of that software, please don't use it, with all the time you have wasted you could have EASILY booted into a live Ubuntu usb (cd?) and copied all of your roms, mounted a Ubuntu VM, or you could have followed the many other options to copy roms that do not damage your partitions.

I have no solutions to any of the issues you posted, since all of them IMHO are cause by Paragon.
Top
Post Reply
13 posts • Page 1 of 1