Little new project: a white wood mini-tower of 3 x H2 with 5-disc cage with which you do not need to disassemble the whole thing to replace a drive. I'll use only 3 hard disks, one for each H2. An ATX SFX PSU will power the 3 x H2 and the disks. It will be used for a replicated NAS and a 3-node Cassandra server. The latter is because any home must have a Cassandra server

See picture below. As the French says "y a plus qu'à"
. 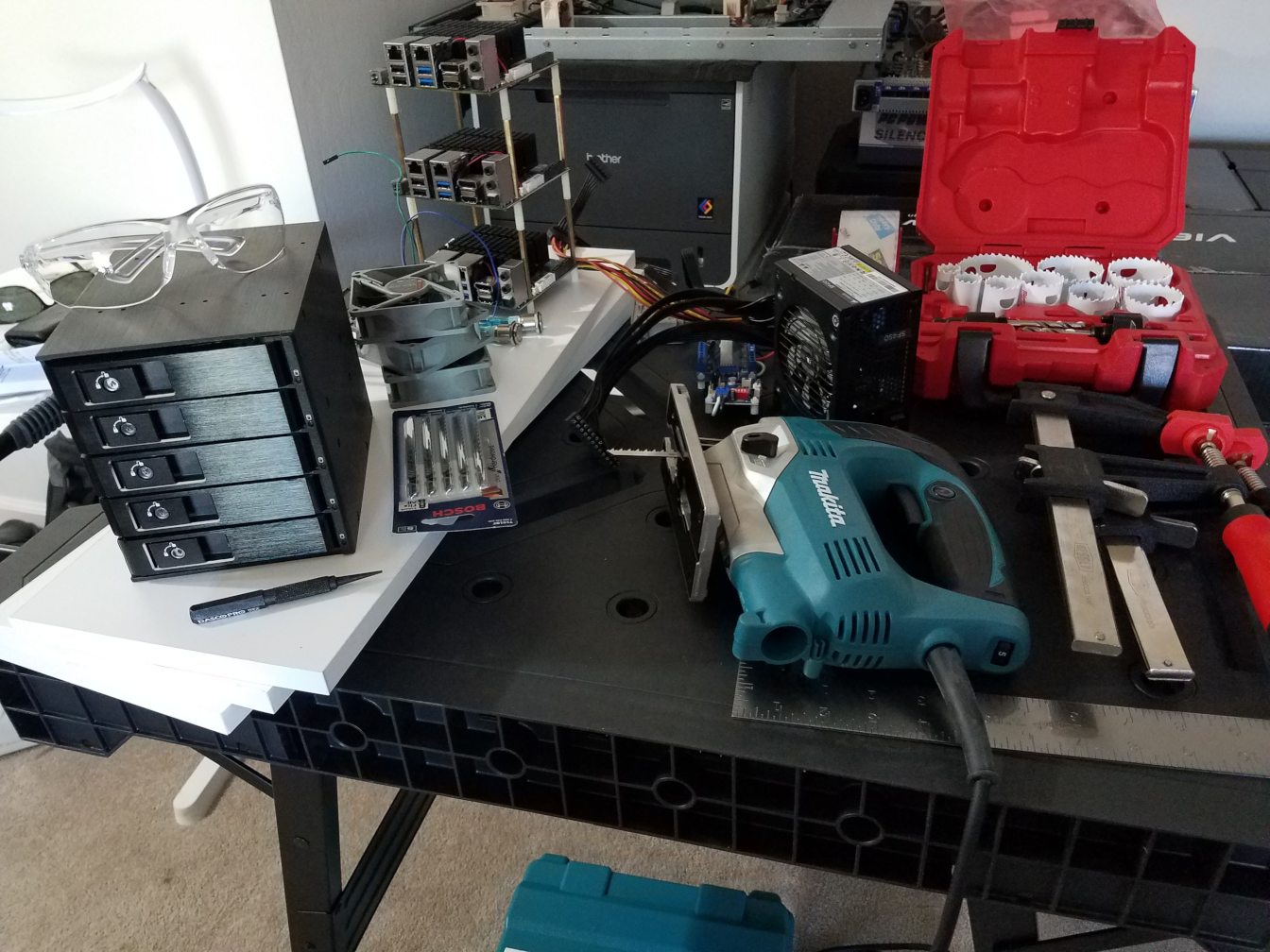 Nice project, why do you need a distributed database?

rooted wrote:Nice project, why do you need a distributed database?

For the shopping list and cupboard items, what else?

Also I'm really interested in evaluating whether or not the algorithms used to distribute PB of data on thousands of commodity PCs are ALSO useful to distribute storage and data processing on SBCs with limited resources.

Update
- Corner braces to assemble shelves with side panels,
- Velcro tape to fix PSU, H2 column and HDD cage to shelves: easy removal for maintenance without fooling around with cramped space for (un)screwing, dampened vibrations for HDD cage and resonance,
- 3.8 x 36" wood to build front mesh frame,
- Plastic back front mesh,
- Loctite to assemble front mesh frame and glue the mesh to it. 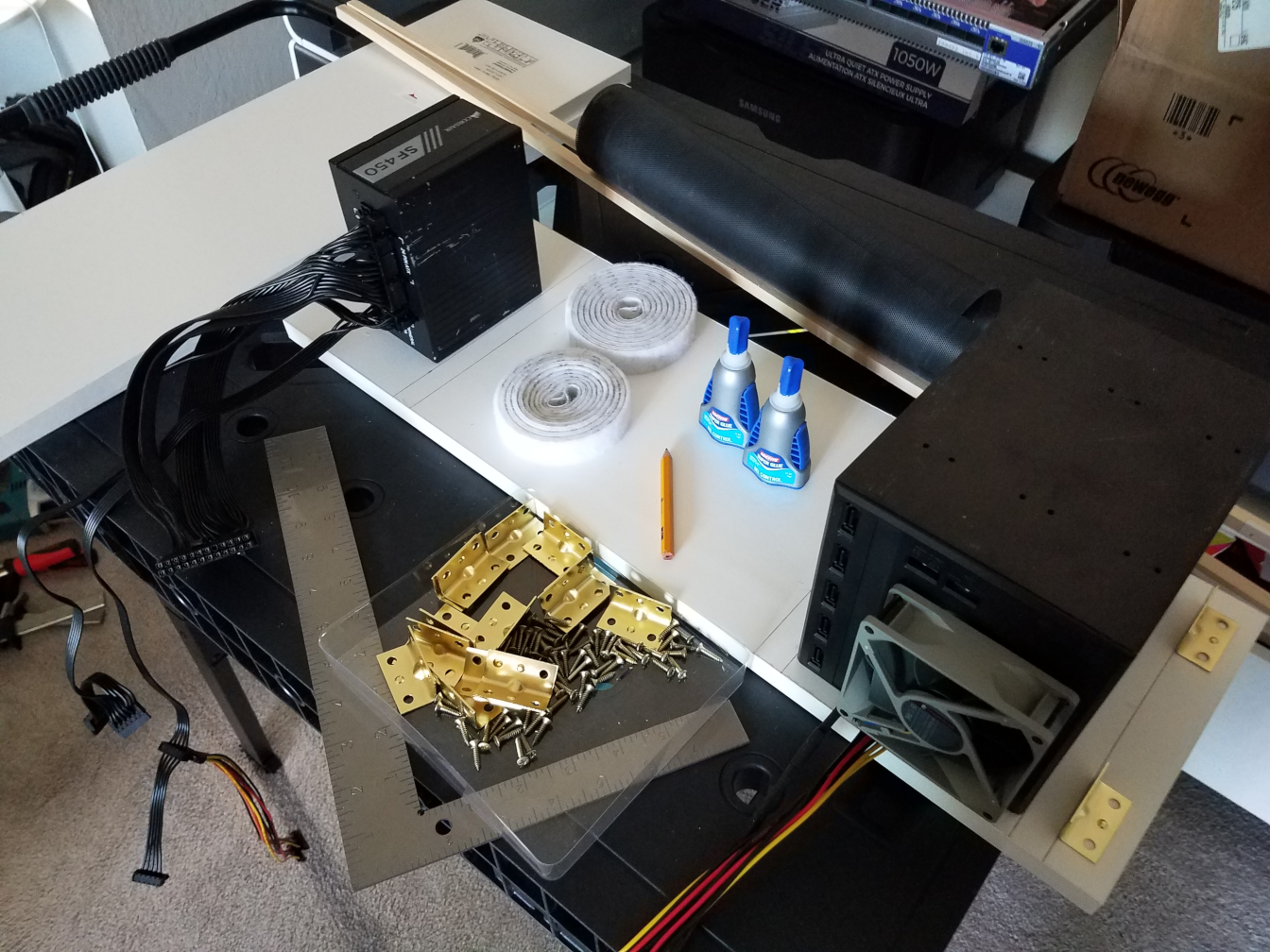 See overall view of the case shown below (build in progress).
. 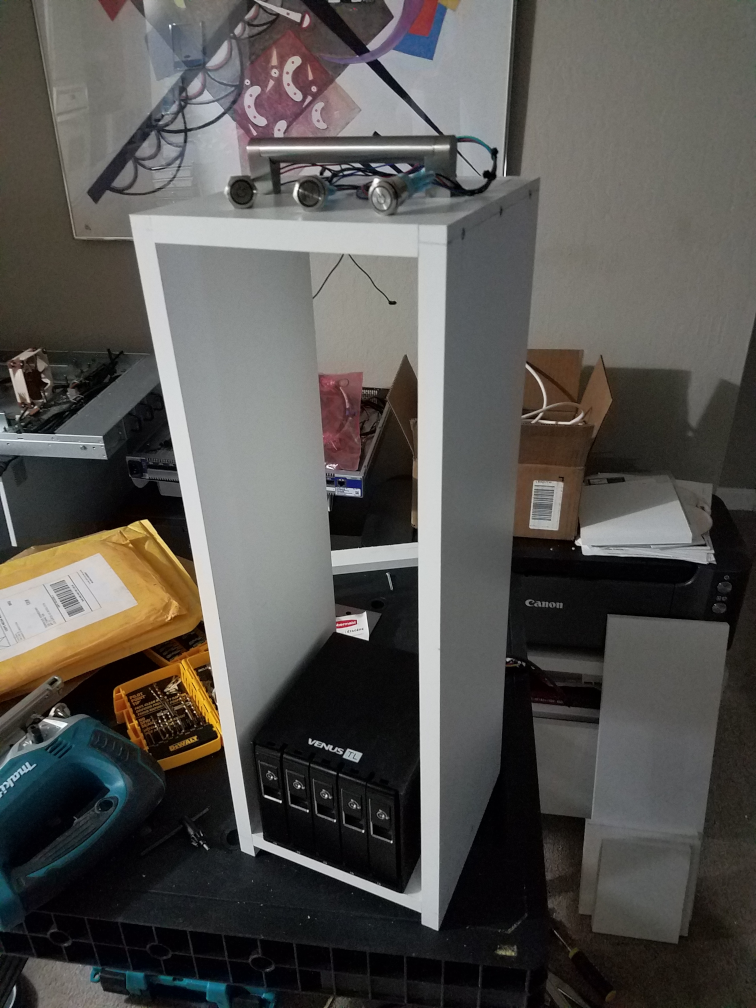 .
I dropped the usage of corner braces (with the original goal of leaving the sides virgin of any marks), not easy to fix correctly though, result not solid enough. So I went with Philllips pan head 6x1 1/4, three on each side for each shelf. Very solid. I'll mask the screw holes with white putty or plastic round covers.

At the top there is a nice aluminum handle to make the handling/transport of the case easy. The 3 x H2 LED power button will also be on the top. I'll need a 5/8" drill bit, the closest to the 16mm button diameter. Yeah, these buttons are available again. I ordered the 3rd button (plus a few other things) from Ameridroid.com and as usual got it 2 days later with the usual Haribo Goldbears. Kudos to Ameridroid.com! Disclosure: they are not far from the San Francisco Bay Area so I'm a privileged customer in terms of delivery time 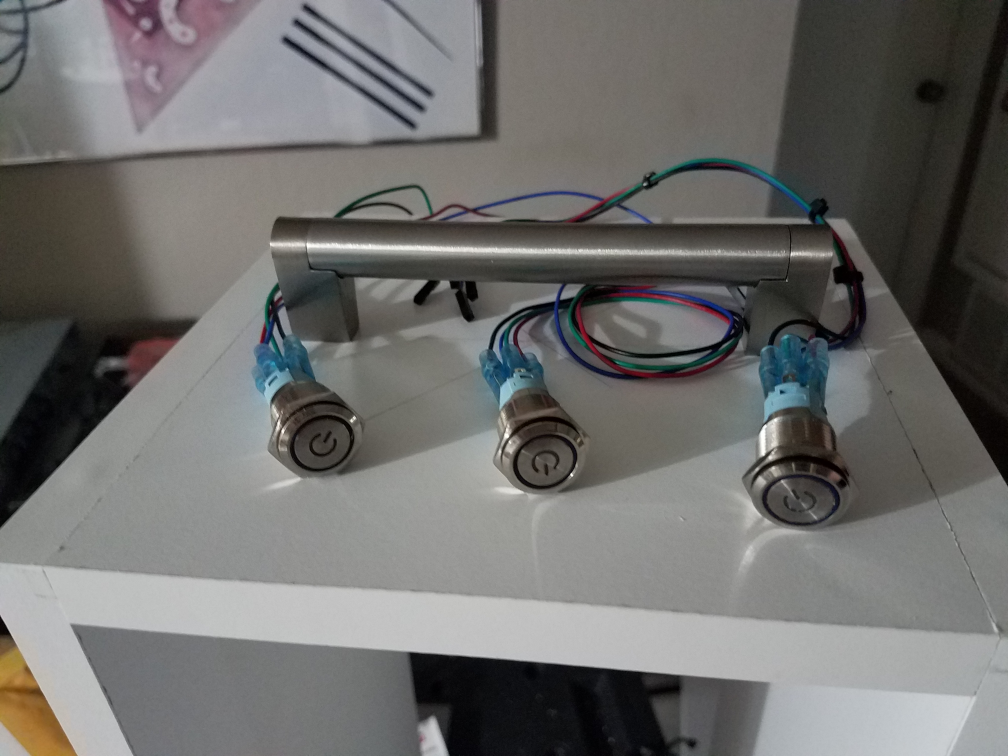 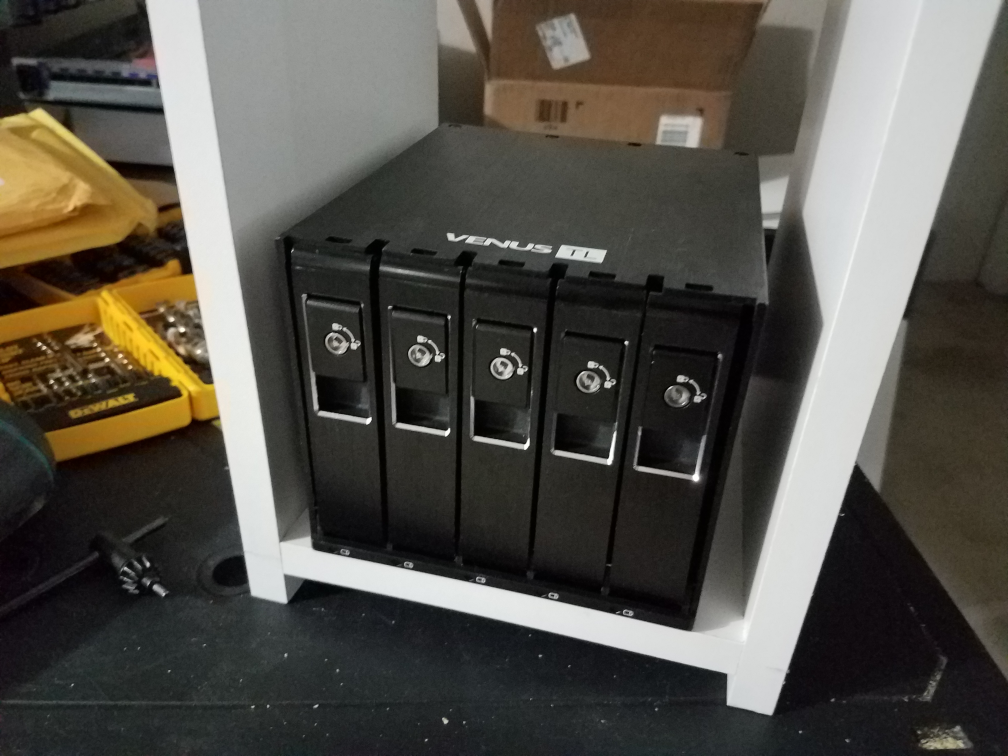 .
I'm also working on setting up the 3 x H2 and their powering. See picture shown below.
. 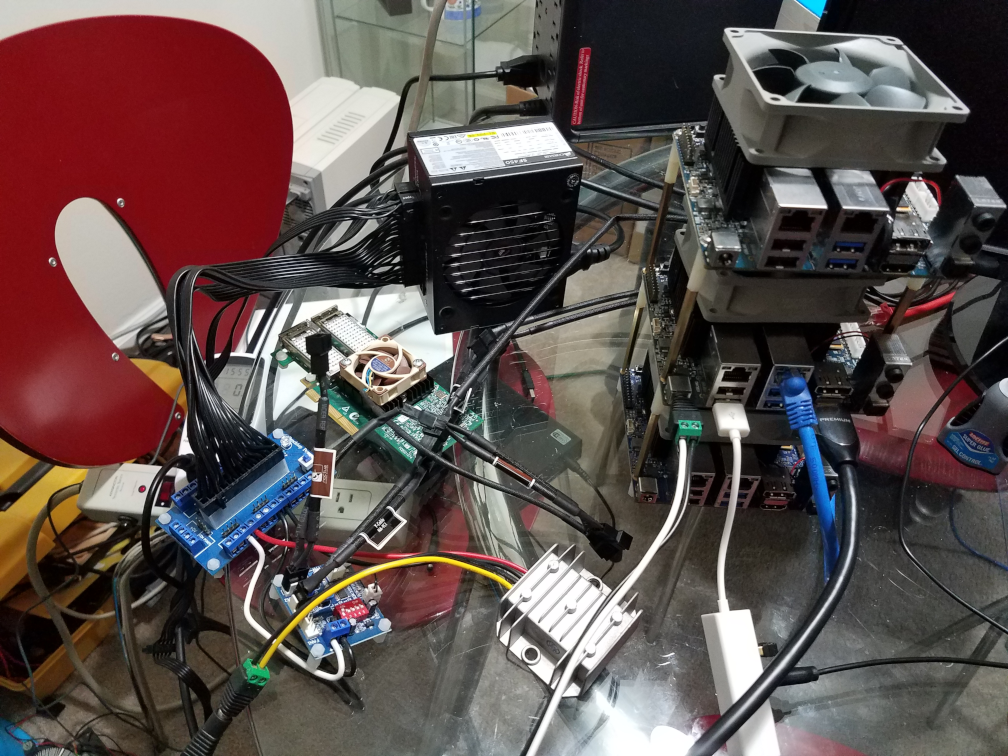 .
It's basically an expanded version of the setup I used in https://magazine.odroid.com/article/net ... odroid-h2/. Originally, I wanted to go with 2.5 Gbe using USB 3 adapters in order to pass the 1 Gbe limit. But following testing it appears that these USB 3 adapters are having teething issues, see viewtopic.php?f=172&t=38713.

So I revisited the networking solution with the following options: (a) Wait for Hard Kernel in case they would make a new SBC with 1+ Gbe NICs (b) Try 10 Gbe SolarFlare NICs (i.e. the SFN5122F which you can find for $20 or less on eBay, soon they'll give you one free when you buy detergent or toilet paper) with SFP+ DAC cables and a Microtik CRS317-1G-16S+RM switch, overall unbeatable prices compared to 10Base-T RJ-45 solutions - as of this writing (c) Continue with the Mellanox InfiniBand solution. In the Odroid Magazine article I wrote:

.../...
Note: do Mellanox ConnectX-3 cards also work on the ODROID-H2? As of this writing only the Pro version works. The non-pro versions do not. Know anyway that in terms of max speed achievable on the H2, the ConnectX-3 will provide the same result as the ConnectX-2. The ConnectX-2 provide 40 Gb/s in IB mode but only 10 GbE in Ethernet mode. The connectX-3 provide 40 Gb/s in IB mode and 40 GbE in Ethernet mode. However IP over IB provides a speed as good (if not a little bit better) with a port configured for IB as IP on a port configured for Ethernet. So really, no need to run a ConnectX3 Pro on the H2 (unless you already have a 20 or more GbE network running at home based on Ethernet).
.../...

I finally decided to adopt this solution when I found an eBay seller selling used ConnectX3 Pro cards for $45 each. See these cards having their thermal paste re-done in the image shown below.
. 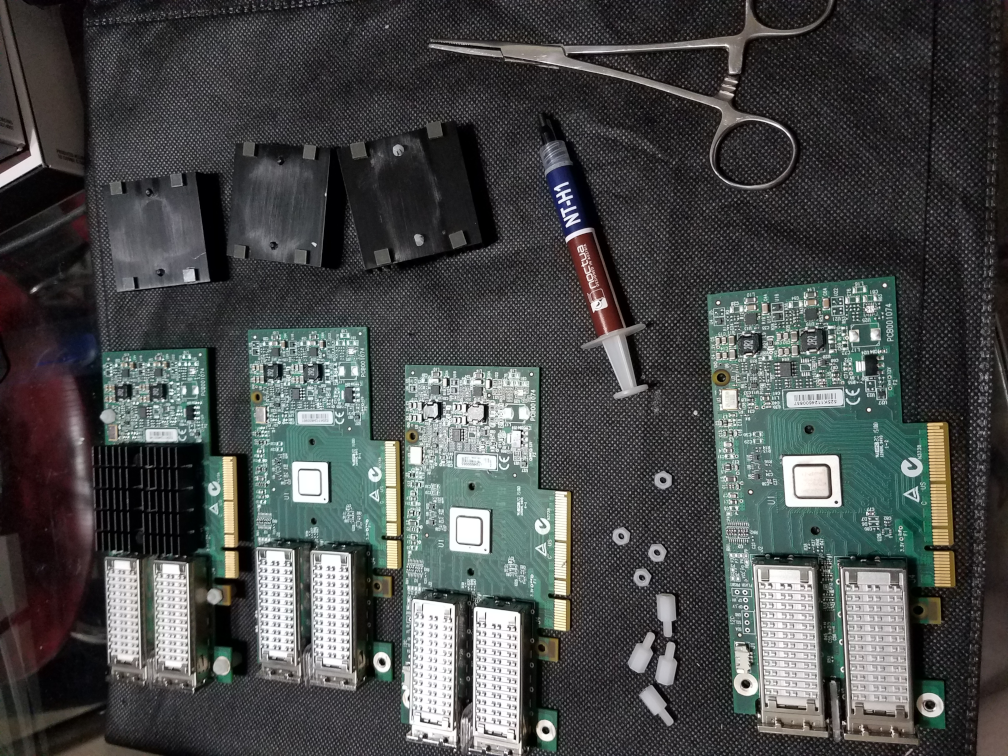 Also note the 80mm fans on top on each H2. They are fixed with a small square of Velcro to the heat sinks. No vibration noise. The speed of the fans is set using the small fan board you can see in the picture shown earlier.

See front and back view of the case shown below. Work in progress. The LED power buttons left the top of the case to go down with the 3 x H2 shelf. One more shelf TBD for the PSU + breakout board + fan board.

Note: I dropped using a mesh for the front side of the case. I'll instead use a dark grey or blue acrylic door.
. 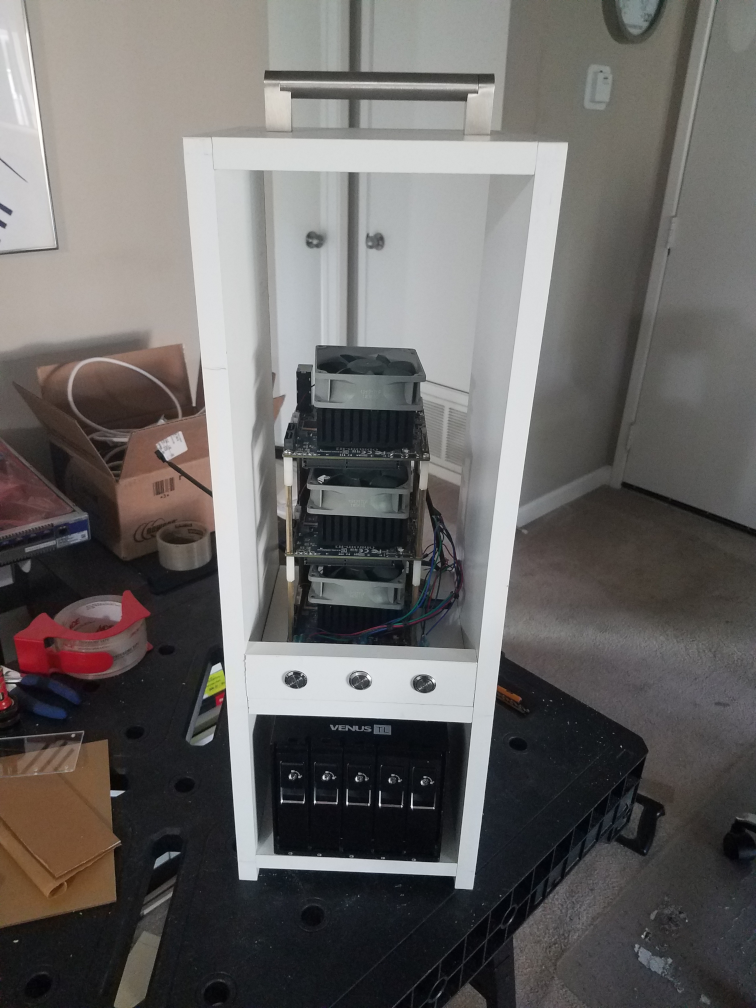 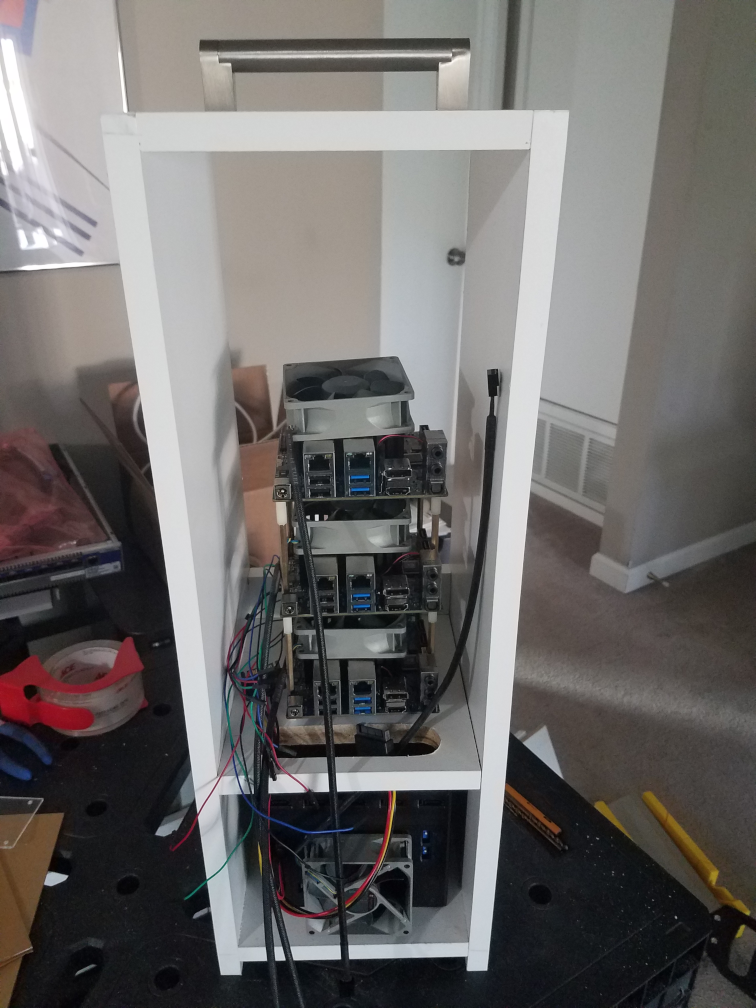 .
Note the oblong opening at the back of the shelf to allow cables to go through. The PSU shelf will have the same opening.

1 of 3 Connect X3 Pro NIC with custom fan fixed on acrylic sheet. Two bands of Velcro will allow to stick the acrylic sheet to the side of the case. Side and position will depend on the M.2 NMVe M key to PCIe x4 adapter cable which I have not received yet.
. 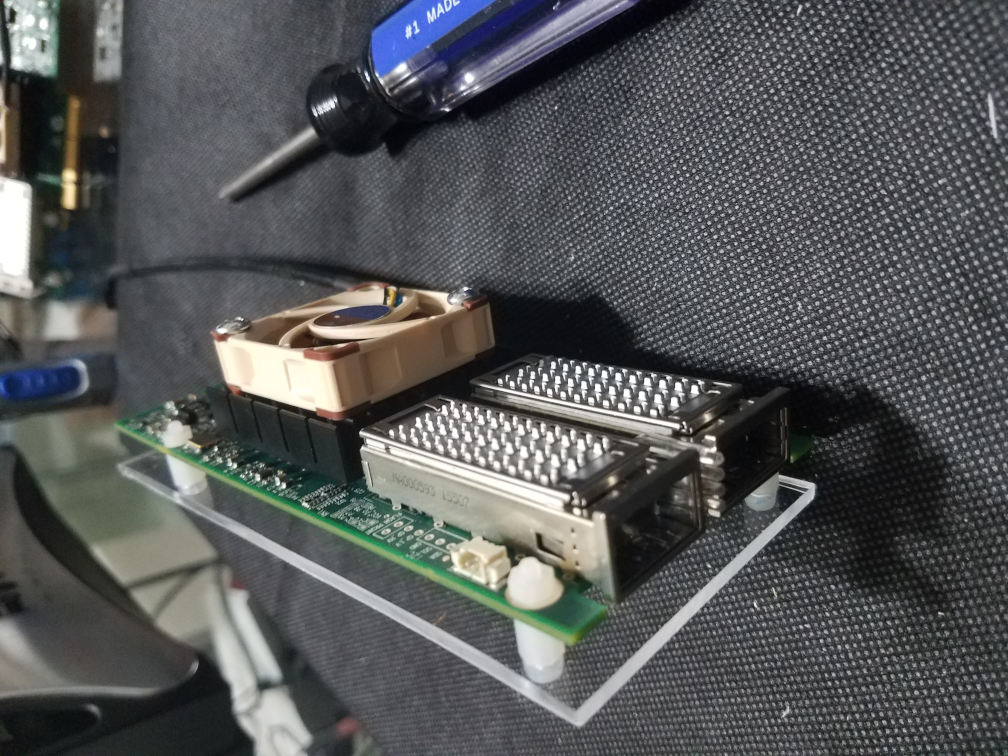 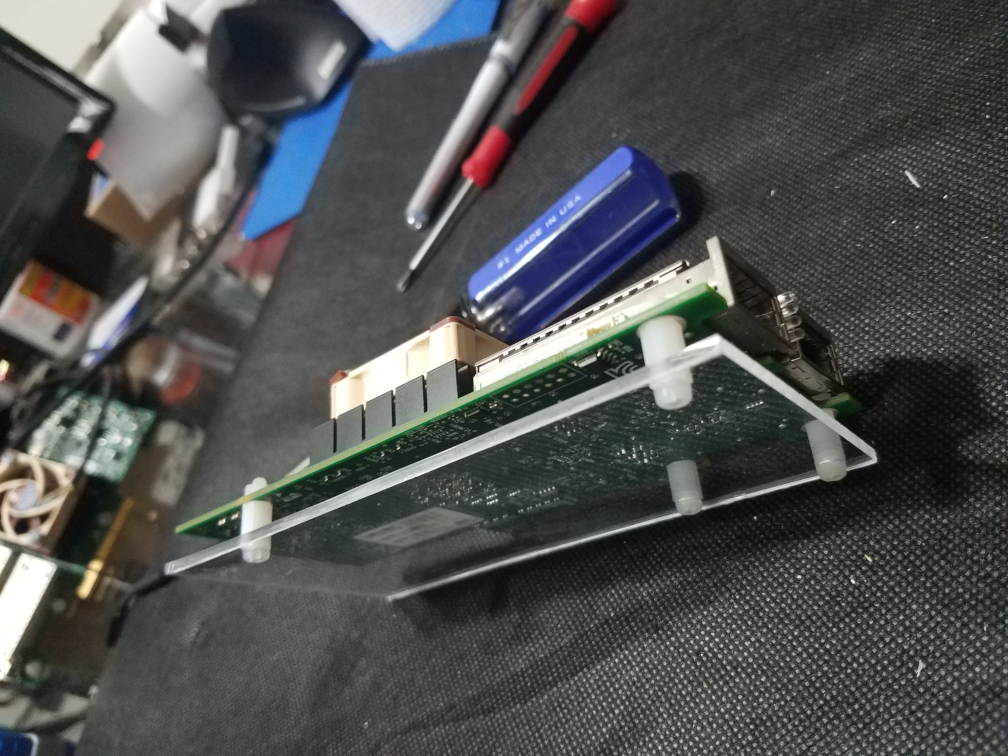 Wondering if the fans will be effective (with airflow restricted) when the H2's are stacked. Small fans vertically mounted behind the fins may draw more air and cool better and eject the air freely at the back of the stack. Just a thought...
Top
Post Reply
9 posts • Page 1 of 1