Hello, I've been doing some H2 testing and thought that others might be interested in my notes. Here are my notes so far:


## Summary
Overall, very happy with the H2's stability, performance, thermals, power consumption, and PXE boot.
Did not suffer a single lock, hang or other hardware-based problem during the testing.

In the EFI shell, these hardware/driver/firmware commands all worked without any apparent errors: devtree, devices, drivers, dmpstore, smbiosview, drvdiag, map, memmap, sermode (see "help -b"). However, the ipconfig and ifconfig commands failed to set an IPv4 address, either through DHCP or statically, even after manually loading the latest Realtek driver (RtkUndiDxe.efi). Likely not a firmware or hardware issue; likely a problem with these EFI shell utilities. PXE boot works fine.


## Thermals and Stress Testing
After setting both thermal limits to their maximums in the firmware, and stressing the H2's CPU for 20 minutes at 100% for all cores using Phoronix Test Suite, with no CPU fan, in a HardKernel Type 2 case, in a 25 C room, while copying thousands of files around on the M.2 SSD, and streaming multiple YouTube videos, the H2's CPU cores' temperature stabilized around 94 C. With an 80mm USB fan sitting on top of the Type 2 case during the same stress test, the H2's CPU cores' temperature stabilized around 74 C. When only the CPU was stressed, with no extra drive or network activity, while using the 80mm fan, the CPU cores stabilized around 65 C.

Stress tests were run using Phoronix Test Suite and MemTest86 to try to get the motherboard, CPU, memory and/or M.2 SSD to fail. Some tests were done with the H2 wrapped in two bath towels to trap as much heat as possible to trigger thermal throttling in the CPU. No hardware failures were detected. MemTest86 showed zero errors for all memory tests prior and after running the other tests (MemTest86 stresses aspects of the CPU and motherboard too, not just the memory modules).

To compile the Linux 5.1.16 kernel on the host, with no VMs running, required 1 hour and 18 minutes. This did not include making modules. To compile Linux 5.0.0 using the Debian/Ubuntu method, which creates deb packages for the modules, required an average of 1 hour and 44 minutes over three tests. The H2 booted and ran successfully with the new kernels.


## QEMU+KVM: Windows Server VM Performance
The H2 was tested as a QEMU+KVM virtualization host server. The VMs were all Windows Server 2019 Datacenter Edition with graphical desktops and Firefox 68 installed. The VMs were each allocated 4096MB RAM, 2 CPU cores, and no sound card. The VMs used the VirtIO disk driver, VirtIO network driver, QXL video driver, and the Spice display system. There were no BSODs, driver issues or other problems while installing the OS into the VMs, while installing Firefox over the Internet, playing YouTube videos in Firefox, configuring server roles, or otherwise using the VMs.

Rebooting five Windows Server 2019 VMs simultaneously required an average of 64 seconds and ran the host's CPU cores at 96-100%. Reboot was measured from a logged-on desktop in each VM to the appearance of the "Press Ctrl-Alt-Delete to Unlock" message after the reboot (scripted with PowerShell in each guest to all reboot approximately simultaneously). From the VMs being completely powered off, powering up, and displaying the "Press Ctrl-Alt-Delete to Unlock" message on their Windows desktops after booting, the five VMs required 42 seconds (scripted with virsh on the H2 host).

With five test VMs running, and three of these VMs playing YouTube videos in Firefox in theater mode (640x360 video size, 480p quality) at 24 fps, the host's CPU cores all run at 95-98%. About 10% of frames were dropped on these three VMs and the playback was very jagged. Stopping playback in one VM caused the other two VMs to (mostly) stop dropping frames, making the playback (mostly) watchable, and the H2 host's CPU cores lowered to around 86-93%. The other VMs were logged onto their desktops, but otherwise idle.

Overall, when running the five VMs, their Start Menu responsiveness, application load times, and file copy actions were definitely quick enough for light training use. The VMs are bottlenecked by the CPU, not RAM or SSD, for tasks like video playback and file compression. Reducing to two or three VMs would allow tolerable video playback over the network (24fps), but not in full screen mode or with high resolution (720p). In general, subjectively, the VM hosting performance is surprisingly good for such an inexpensive SOC. Windows Server Core or Linux containers as network servers should run even better (that's next).


## Misc Notes
There were no problems during the manual installation of Ubuntu 19.04 Gnome Desktop.
The NVMe M.2 slot is 4-lane PCIe 2.0, not 3.0, for a max theoretical 2GB/s (don't overbuy SSD).
Don't forget to stop updates and to ngen.exe on any new Windows VMs before doing perf testing.
Did not (yet) install Proxmox or Windows Server 2019 directly onto the H2.
Did not test eMMC or any SATA drives (only the M.2 NVMe drive was used).
Did not test using a PCIe expansion device or bridge in the M.2 slot.
Did not test using both ethernet interfaces simultaneously (only one at a time).
Did not test microphone or SPDIF jacks (speaker jack did work with Ubuntu though).
Did not test GPU passthrough with VMs, if it's possible at all.

## Proxmox
Proxmox 6.0-4 installed from USB drive with no problems (Debian 10 Buster release).
Installed to M.2 drive formatted with ZFS (chose RAID 0 with ZFS even though only one drive).
This means no problems when booting from a ZFS root (ZFS version 0.8.1). No GRUB.
No eMMC or SATA drives attached.
Have had no hardware- or driver-related problems that I could see in the logs.
No problems creating Windows Server 2019 VMs or Ubuntu 19.04 LXC containers.

Very informative, thank you for the review.
Top

hello.. I have had my h2 for a while and start to wonder if it going to manage my next step.

VM . Pfsense . Today it using some times up to 25% cpu on directly installd on disk

Here is some statics over today's system 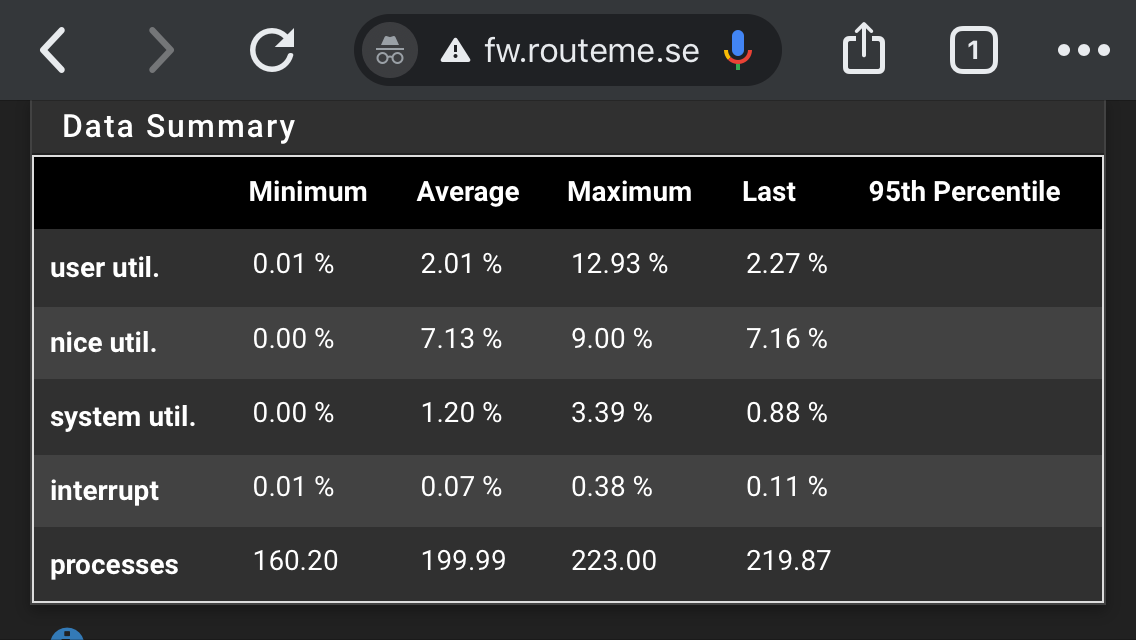