FYI, running a longer compile job on all cores, no fan or case, the H2 gets quite hot
If the sensors are correct and the heatsink does feel very hot
The CPU seems to constantly hit its thermal limit... 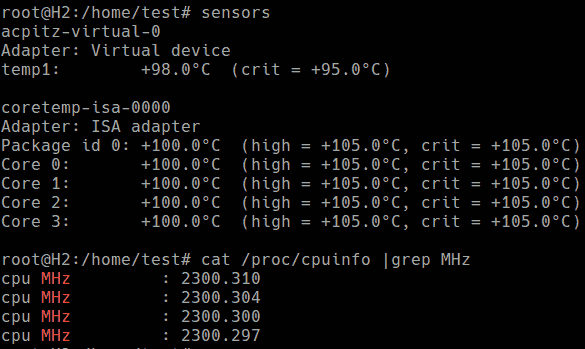 How long till it gets so hot I don't know.
The compile job ran over an hour (as a test how the H2 performance compares to standard PCs)
Top

It has the active fan connector with tach for this reason, when you need to really stress it for long periods you can add the fan.
Top

Which Kernel version do you use?
Top

I'm using the same Kernel version on the generic Ubuntu 18.10.
When I built a full kernel source for 20~30 minutes with -j4 option, the maximum temperature was always lower than 80°C with a stock passive heatsink.
My room temperature is around 22~23°C these days.

What did you compile and what is your ambient temperature?
Top

I don't really think it's a problem odroid, seems normal to me since it's passively cooled.

As you say it depends on ambient temperature.

Look at the XU4-Q, it reaches thermal throttling much quicker due to less mass in the heatsink.
Top

Is there a simple script to collect and graph the temp over time?
Top

"psensor monitor" looks good if you use a GUI desktop.

What is the average temperature without compiling?
My H2 is around 50~55°C for light web-browsing.
Top

It looks quite high.
Does GCC 8.2 compiling use the LLVM technology to utilize the full CPU resources?

BTW, I could observe 86°C after running this command for 10 minutes.

All cores keep running at near 2.4Ghz.

I will check the temp again 20 minutes later.
Top

Room temperature is 26°C though.

I'm heavily considering this cooling fan if we want to make a build farm.
https://www.hardkernel.com/shop/92x92x2 ... sor-tacho/


BTW, something weird.
When we performed the same test in last October, the maximum temperature was less than 80°C.
I think some kernel updates might affect the performance and temperature probably. But is it very hard to trace root causes.
Maximum clock frequency was 2.3Ghz at that time. But it is 2.4Ghz now.

It seems to be worth to run the stress-ng with 2.3Ghz limitation on /sys/devices/system/cpu/cpu*/cpufreq/scaling_max_freq.
Top

AFAIR a compiler such as GCC is build actually 3 times, it rebuilds itself and then compares the result against a previous run as the result must be the same.... but someone smarter than me can explain this better

Long running compiling stuff is a good load/stability test for a system, for example an instability was found on early Ryzen models by the Gentoo folks: https://wiki.gentoo.org/wiki/Ryzen#Segm ... ompilation and https://forums.gentoo.org/viewtopic-t-1061546.html.

As you mentioned a build farm, I'm a bit undecided now what to do.
My plan was to use several H2 as a low-power/cheap cluster for testing distributed code -- some things just can't be tested with VMs and/or containers. I currently use several C2s for this. Alternatives: XU4's are only 32bit. C2s are weak and have a too old kernel. The N2 is coming but some stuff does really require x86. And the H2 is unobtainium for another half year?
So where to go from my current C2s setup that is running at its limit and cannot do x86?
Sell the H2 and get used DeskMinis instead? :-/
Top

Depending on how soon you need the devices, if sooner than 4 to 6 months I would look elsewhere for X86.
Top

Did you lower the scaling_max_freq value?
Top

No. But I want to run it again to also track cores frequency -- need to script that data collection first.
FYI pretty graph powered by https://plot.ly/create/#/ -- very easy to use

scaling_max_freq is set default to 2500000, and, well, the expected max burst is 2.5GHz
(https://ark.intel.com/content/www/us/en ... 0-ghz.html)
The practical CPU limit seems to be at 2400MHz, hitting the hard thermal limit of 100°C after some time and throtteling.
Setting scaling_max_freq to 2300000 does limit the cores to 2.3GHz and makes hitting the thermal limit somewhat harder.
However, it's now winter and 24°C ambient, without a case -- in summer and with a case this will not get better... 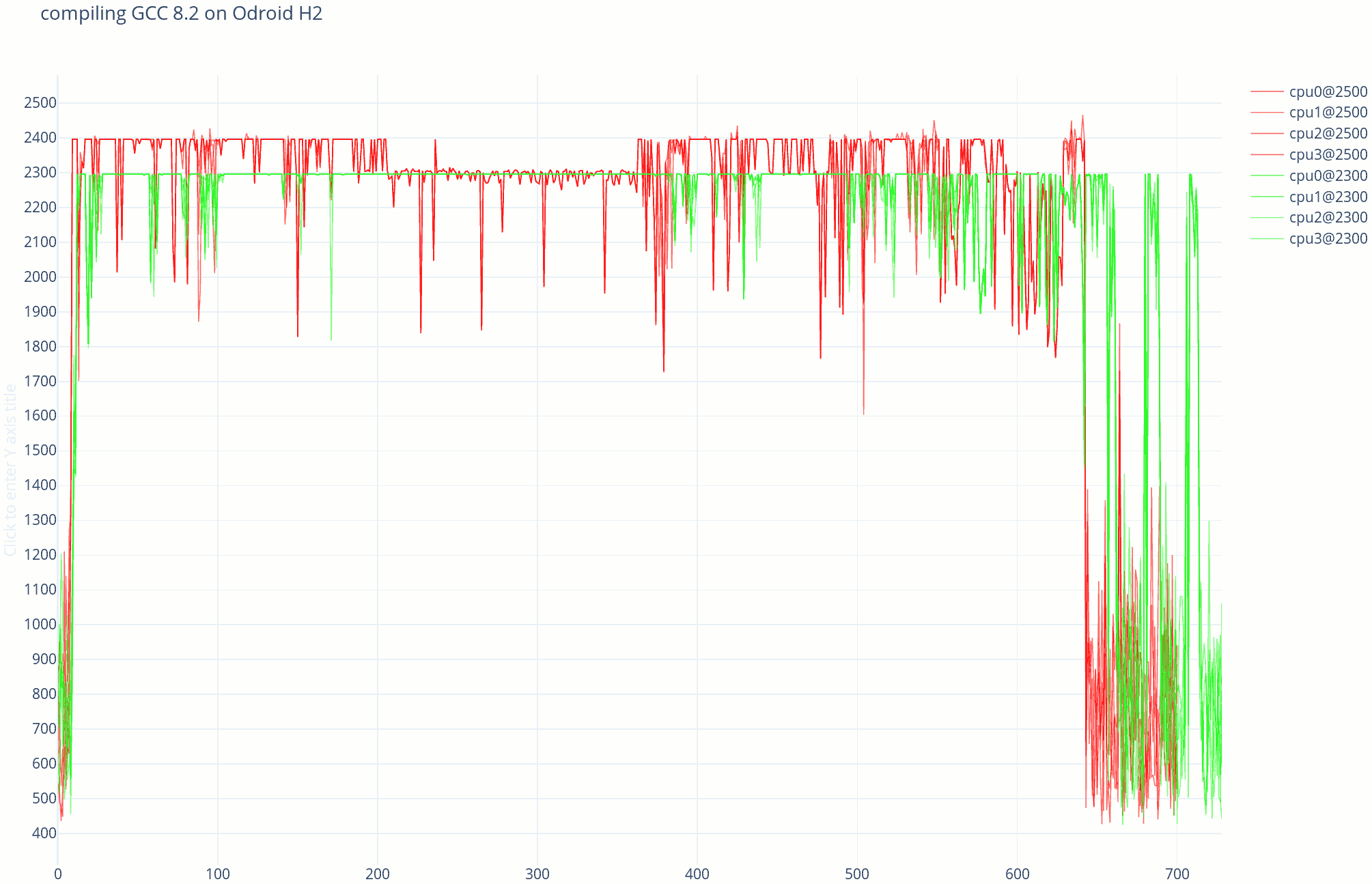 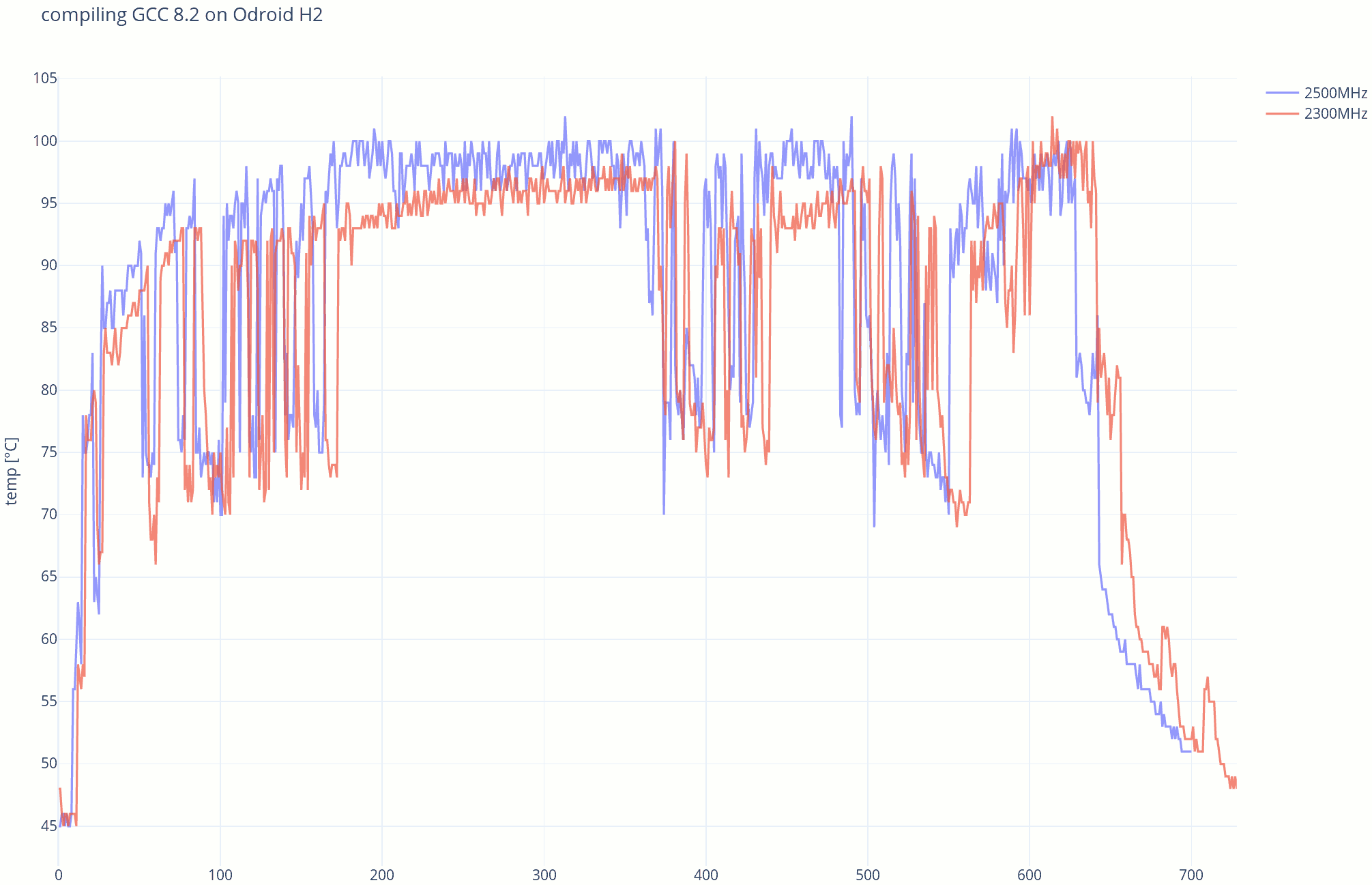