I am pleased to report that the migration of my existing project from a Raspberry Pi to the Odroid W is a success.

Actually it was much smoother than I expected, giving that it involved quite a lot of wire soldering (no headers), which is not one of my strong skills...

The project was to create a portable, good-quality digital audio source, with storage, user interface, decoding, and a line-out for a portable amplifier.

The original version involves a Raspberry Pi model A, a custom Hifiberry DAC, a 2"2 320x240 colour LCD (non-touch), and a keypad.

The specially made DAC communicates with the Raspberry through the P5 header, using I2S (8 wires).

The original keypad was a 4x4 matrix with only 2 rows/3 columns used (5 wires).

The single USB port is used with a Trendnet Wifi dongle for ssh access during admin & setup, then with a dongle for an "air mouse" that acts as a remote for the player.

The first version works well, but is quite bulky, due to the size of the Raspberry, the way the DAC fits under it, and the extra space taken by the various headers and Dupont connectors.

Despite my efforts I could only fit it inside a fairly thick case, seen here :
http://www.tellementnomade.org/forum/vi ... 40#p230179

Also, despite its size it is portable but not autonomous, it depends on an external USB power source.


When I heard about the Odroid W I immediately knew I could make a better version with it !
First make it smaller, then maybe add a battery, make it self-powered and mobile.

For the first step I added exactly the same DAC and LCD to the W.
The keypad was a simpler 4-button board, wired as a 2x2 array (4 wires).

So 40 solder points were required for the wires, plus the USB and stereo jack sockets...

After that I just transferred the existing microSD card from the Raspberry to the Odroid, and to my great amazement... it booted and started playing music right from the start

For a while I was afraid I'd received a defective board, as the USB port did not always work, and there were some spontaneous reboots... but then I suspected my soldering might be at fault, so I redid all four points, and after that performance was just as reliable as on the Raspi

So in my experience the hardware compatibility between the W and the Raspi A has been quite flawless, and the result is incredibly compact.

Actually I now have too many options for encasing it, and I can't choose

This makes it even more sad that the W has to be discontinued in its present form, because it is a very worthy little board with a lot of added value.
I'm going to order another one while it's still time so I can experiment more

You didn't realise that was the OP replying ?
Otherwise STFU seems a tad rude.
Or maybe I'm missing the joke ?

@fpp
Interesting project. Thanks for sharing.

Maybe I should clarify. The STFU goes to the tl;dr demanding crowd, and not to the OP. That this abbreviation even exists is a pretty sorry state, since it shows that people are not willing to focus their time on something. Following a longer conversation, reading and analysing a longer text, etc., people are less and less capable of doing this. Don't let these people tell you that this is a good development, because it definitely is not. Therefore: STFU to all of you who think "tl;dr".
Top

Well, either way those two additional words got a lot more attention than the large post before...

LiquidAcid wrote:Maybe I should clarify. The STFU goes to the tl;dr demanding crowd, and not to the OP. That this abbreviation even exists is a pretty sorry state, since it shows that people are not willing to focus their time on something. Following a longer conversation, reading and analysing a longer text, etc., people are less and less capable of doing this. Don't let these people tell you that this is a good development, because it definitely is not. Therefore: STFU to all of you who think "tl;dr".

Fair enough, And I do agree with your sentiment. Once explained !
These days it seems everything has to fit in a 'tweet' or it's tl;dr.
Top

Nice project. Thanks for introducing me to pygame seems a great way to get a small custom display working without X.
Top

Thanks ! Everything you need to know to get one of those small, cheap SPI LCDs working on the raspi/W can be found by starting from here :
http://marcosgildavid.blogspot.fr/2014/ ... ng-on.html

Then in Pygame it is just a matter of setting an environment variable at the start of the script to make it use the framebuffer for that display...
Top

I just realized that when I wrote the first post I hadn't yet taken pictures of the new Odroid W setup, so here it is : 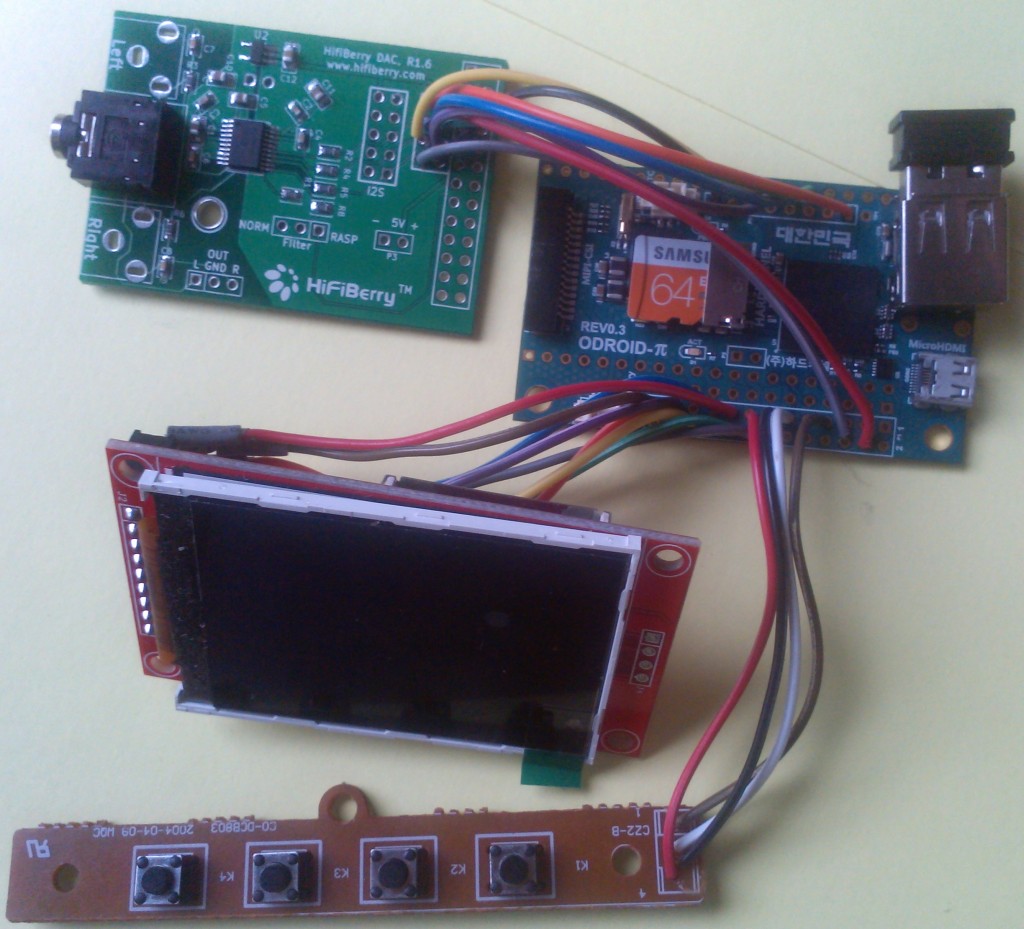 I hadn't realized either that this forum supports local attachments, so I'll add inline pics in that first post too...
Top
Post Reply
10 posts • Page 1 of 1